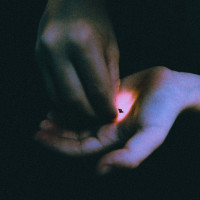 Since their debut came out in 2013, Bambara have made several changes to their sound. Whereas Dreamviolence was heavily influenced by noise rock and featured mechanical noise, walls of guitar feedback, and a very lo-fi feel; their subsequent albums have seen a transition to what could be described as Southern Gothic Post-Punk Blues. Their latest album, Stray, is testament to how perfectly this style fits them as a band.

With a sound that recalls The Birthday Party or early Nick Cave and the Bad Seeds, the wall of feed back is still there. The band also tosses in a touch that adds the feel of early cowpunk bands like The Gun Club to their music. Add to that the rattling voice of Reid Bateh who sounds like David Eugene Edwards, Ian Curtis, Alan Vega and Jim Morrison back when he was still young enough to sound dangerous.

Lyrically, this band creates narratives you can get fully lost in. Sometimes the narratives are in the first person, such as on songs like “Machete”. Elsewhere, the stories are told in the third person, such as on “Serafina”. This track suggests the narratives you’d hear on one of the first three Hold Steady albums, the characters are darker though. The Hold Steady typically sang about young adults making horrible choices and finding redemption. On “Serafina” and a few other tracks, the characters aren’t always making poor choices, but it doesn’t matter. They know they’re staring down the end of the world.

It all comes together to create a record that sounds simultaneously contemporary and like it’s a classic album that somebody forgot to put out back in the early 1980s. You can hear their noise rock roots, but they’ve built blues upon this, and you can feel the cold urban landscape of New York City being interpreted through the eyes of a band that’s originally from Athens, GA. Saying this should be a contender for one of the best albums of all time, it would be hard to defend. This record is a super early contender for album of the year for me though. It’s loud, dark, and thundering. Bambara suck you into their world for just under an hour, and as unpleasant as it can be. It’s not one you find yourself ready to leave.

Miguel Chen: The Death of You: A Book For Anyone Who Might Not Live Forever

Too Many Voices: Catch Me If You Can