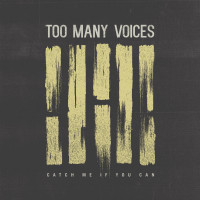 New York’s Too Many Voices have quietly put out clever and introspective punk songs for damn near a decade now. Their brand is one that embraces melody and harmony while offering thoughtfully personal lyrics. There’s a maturity embedded in the music of Too Many Voices that elevates them well above most other melodic punk bands. The band recently hooked up with Division Street Records and Not Like You Records who gave their most recent recording, Catch Me If You Can, a proper vinyl release.

The seven-song EP stands out for its musicianship and continuity foremost. The writing is impressively structured, and the recording captures layers of guitar and vocals that most other bands don’t think to dive into. “Solitary Man” is a great exemplar for this. The EP’s fifth song combines catchy verse parts that move the song into more ambient choruses. It’s the choruses here that showcase what Too Many Voices does so well. The harmonics that fill the guitar ring-outs complemented by the gruff vocals styles build the listener up to a classic gang-vocal punk sing-along. The lyrical content and pace similarly add depth to the song by understanding the balance between original verses and the power of repetitive choruses.

Catch Me If You Can’s opener, “Can’t Stop This Feeling,” is one of the heavier and more foundationally powerful songs on the record. The guitars pound through a tightly wound verse only to bring the band’s sense of melody into view with the chorus. But here the band deftly balances growling lead vocals with harmonized gang vocals. The song barely hits two minutes and pounds the entire time through. As an individual song, “Can’t Stop This Feeling” draws on a Token Entry skate-style punk vibe but without overdoing the 'old school' vibe. The song is modern and catchy and subtly heavy.


But it’s “Life on a Sandbar,” the record’s third song, that shows just how impressive Too Many Voices are as musicians. The song plays out in a ballad-esque way the avoids any sense of triviality or cheesiness. The guitar work in the song is reminiscent of a grungy-90s vibe, offering a melodically eerie atmosphere that complements the existential quality in the lyrics. The vocal recording here is really well thought out too. The band finds the perfect spots for layering and doubling-up vocal tracks, adding to the power and melody of the song overall. The chorus is somber and powerful, and it reflects a level of musicianship that isn’t often found in the genre.

Catch Me If You Can is impressive for a variety of reasons, not the least of which is the musicianship that comes through on the recording. The EP should appeal to everyone from West Coast skate punks to over-the-hill punk parents to hardcore heads that understand the power of melody and lyrical content. It really is a bit of a wonder that Too Many Voices aren’t on more people’s radars at this point. Perhaps Catch Me If You Can will better show the punk world what they’ve been missing out on.