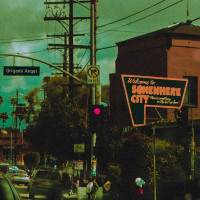 The city of Somewhere is a place purely for escapism. It’s a getaway destination where you can recharge and reflect, where you can gather your thoughts, your emotions, and your senses. Everyone enters as a tourist, but when it’s time to head back to reality, you’ll leave refreshed and feeling like a local. And in your inevitable return, you’re welcomed with the heart of a city as if you never left.

If you’ve haven’t been, do yourself a favor and check out the album Somewhere City from the duo and local favorites, Origami Angel, who will paint the picture of what to expect. With just two members, the band projects a larger than life sound as if the city that they sing about is part of them in their virtual tour of the landscape and the stories that give it a pulse. They know the lay of the land, and through cheery, nu-emo driven songs that burst with adolescent energy, Origami Angel preps and navigates you through Somewhere, should you decide to slip away for a mental holiday.

Somewhere City was recommended to me, and after my first run-through, it instantly reminded me of a place that I’ve been several times before. It was a unique experience, being guided hand-in-hand through the town with Origami Angel and their music as the soundtrack. You instantly feel invited with the charming “Welcome to…” sign as you enter the city limits. From the get-go, it’s obvious that Somewhere is personal to Origami Angel; and as they claim over soft melodies packed with pungent outbursts, it's a place that you’ll never feel alone. It’s clear that just being in Somewhere has never let them down, and it comes off in their outcries pledging their allegiance to their home away from home.

You’re taken through some of the local hangouts and landmarks with a wacky combination, (that works,) of late 2010’s emo-pop vocal treatment, speedy folk-rock strums, and straight instrumental chaos. As you move about, your own memories begin to unlock with the realization that some of these places are representative of your own situations from the past. It’s when the band breaks out into “Doctor Whomst,” where you begin to believe that Somewhere is special. The poppy and enthusiastic chorus of “I think I'm starting to like myself/ I think I'm right where I need to be /To be the best version of myself / To be the version that I want you to see” supports this, creating an awakening moment of self-reflection.

I hadn’t physically stepped foot in Somewhere yet, but I was already feeling a sense of belonging. “The Title Track,” through some epic drumming and boy band-ish wooing, reaffirms that this is where one goes for a cleansing. It’s where I, you, all of us, can go to ponder yesterday’s and wonder about the future. It’ll take you back to things you could have said or done, like in “Skeleton Key,” and how you can be better moving forward. This was the highlight of the tour, absorbing the whopping and breakdown-y closing hook of the track in “I hope / You know / Everything you do is / Special to me / You're my skeleton key.”

As our time spent around Somewhere was coming to an end, the band broke out into one final song in “The Air Up Here.” Here they recapped our time together by taking little bits of each of the places we stopped and the stories they told along the way to craft one giant conclusion. We were approaching the “Welcome to...” sign from where we began, and at that moment, it was like all of the townspeople, all of the visitors and all of the passerby’s came out of the stores and jumped out of their cars to join Origami Angel in a sentimental, choir-like closing line in “The city never lets me down / Noooo-ohhhh / You'll have to see /There's just something in the air up here.” It was here, that after experiencing Somewhere City, you know it’s a place you’ll need to visit quite often, but oddly realize it’s Somewhere that you’ve always been coming to, but never saw this side of it.

Too Many Voices: Catch Me If You Can

Suspect Parts: You Know I Can't Say No