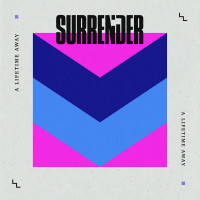 The way into understanding Surrender’s self-titled debut is to listen to album-highlight “Hold On” twice, first passively then actively.

On the first pass, the texture and setting of the album snap into focus: goth-forward synth-pop leads, bouncy, goofball electric basslines, booming programmed snares, a general focus on creating dance music for people with long black clothes and expensive haircuts.

On the second pass, song unfolds and the lyrics reveal that something little deeper, a little less superficial, is going on here: “Carve your name and wave goodbye / Set sail for stars and blackened skies / A dark so deep it strangles you / And so you quake ‘til nothing moves." The trick is that it’s more subtle and well sold than it looks on paper. The skill is merging these two distinct moods – the dancer and the depressed – without obvious incredulity.

So it goes on Surrender, a new-wave record that feels willfully nostalgic and at times reductive, but none the less delivers the goods for people who want to consider their own existential collapse while they cut rugs through the fog machine. The brains behind this project are Scott McCash and Dave Williams, formerly of the tragically under loved art-punk band Crusades. Truly, they’re the type of guys you want making this music. Crusades’ great success was its ability to balance the aesthetics of its bit (an anti-religion band with next-level iconography and a commitment to giving albums extremely metal names without being metal) with shit-hot punk songs that lived somewhere at the intersection between hardcore, pop-punk, darkwave and outright mall goth, without ever tipping too far in any one direction or being too direct. They’re as dark as they say, is the thing, and they can do more than one thing at once.

Those skills translate on songs like “A Lifetime Away” and “Hurt No More,” which come off like huge pop swings on a small budget. McCash’s voice is not naturally suited for new-wave – it sticks out and pushes itself to the front of the track, as opposed to blending into the mix as an additional melodic element – so it works when the duo swings for the fences. It sits a little more strangely on subdued tracks like “Carefully, Carefully.” The duo’s commitment to the aesthetics of the time period they’re working in – roughly speaking, 1984 to 1987 – can be occasionally distracting (the saxophone solo on “Keep Running” is as garish as a cell phone going off during a play, and just as disruptive), but it’s competent and effective across the board. Surrender is riddled with little tricks to keep things interesting; well-placed and creative vocal melodies, adding chops and inflection points in unexpected places (the delivery of “held on / hoping / holding was” on “Hurt No More” continues to reward after repeat listens).

Suspect Parts: You Know I Can't Say No

Leeched: To Dull the Blades of Your Abuse