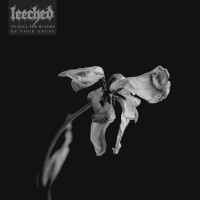 I was having a really shitty day last week. My day job was kicking my ass, my dog had to go to the vet, I’d just had a shouting match with the crotchety old dude down my road about parking, you know the sort of day. Then I walked back into my house; I accidentally snagged my headphones on the door handle, pulling them out and cracking one of them. Then looked in the mail and found that I had a parking charge notice. Then I stubbed my toe. Really hard. As the keen sting of universal injustice ran through me, i gritted my teeth, clenched my fists, closed my eyes and allowed the pain and the even more prominent rage to subside. It took maybe 10-15 seconds, during which I went through what I suppose you could describe as a series of micro mental catharses. Sorry, this was a record review, wasn’t it? Let me come back to this.

Leeched are, if push came to shove, a metallic hardcore band from Manchester. This is their second album in 3 years and beyond just traditional heaviness, there’s a disquieting and seething intensity to this record. And I mean the entire thing. Even in the less obviously crushing moments, the squealing, shrieking guitars and glitched electronics don’t allow you to sit comfortably at any point. Often you’ll be being swept along on a wave of thudding, semi-industrial beats and a squall of guitar with various oddities sat deep in the mix and you’ll find yourself almost reaching equilibrium with it. Then along comes something else. More often than not an apocalyptically heavy buzzsaw guitar riff that feels like it’s impacting your very core. So yeah, Leeched are heavy. They recently toured with Full of Hell and I imagine they would have raised some eyebrows even amongst that crowd. They’re that kind of heavy.

As such, it would be fair to say that vocalist Laurie Morbey, guitarist Judd Langley and drummer Tom Hansel make an astonishing amount of noise; though it’s worth pointing out that the touring lineup also includes Luke Rees and Joe Clayton of Pijn/Curse These Metal Hands (Joe also produced this record). When you consider that group of people, the music they’ve collectively produced in a short period of time (Leeched only formed in 2017 and this is their second full-length on top of their 2017 debut EP) and the depth within it, it’s hard not to be impressed. It’s also very clear how fertile a scene for heavy music Manchester has at the moment. (Not that Manchester has ever had a paucity of impact on the musical world, admittedly.)

From the continuing theme of their artwork, their name, their song and album titles and everything in between, Leeched are remorselessly and relentlessly bleak. There is no space for light or optimism here. When you consider song titles such as “Famine at the Gates”, “Let Me Die” and “Black Sun Ceremony”, you might also expect a tinge of goth, possibly, and although there are occasional suggestions of things more ‘eerie’, the bedrock of Leeched’s sound and approach is grinding, monolithic malevolence. Which will of course polarise listeners and potential listeners alike. Some will turn to Leeched for this exact reason (myself included), some will have a morbid curiosity but nothing more, and of course some will struggle to think of anything they might less like to listen to. It’s here that I circle back around to my opening.

Those moments of introspective bloodletting, when you have no choice but to cast off your rage, your frustration, and in some cases even hatred - those moments as difficult as they can be, have a perversely satisfying and awakening feel to them. I’ve heard it said before that you never know you’re alive as much as when you’re in danger. Leeched make me feel like I’m in danger. And I love them for it. This record does something to me that very few records have been able to. Its nihilism and its swirling maelstrom of unhinged intent verging on violence is, for some people such as myself, a rare and genuine thrill.