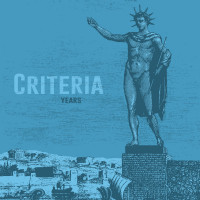 An entrance point album to any band is generally the defining point of the fan’s experience with the artist. It’s almost impossible to top that high when things align and you find yourself dropping a needle or pressing play on a new-to-you band that connects. Criteria is one of those bands that I’ve heard much about at the trough of early 2000s Midwestern emo, but have never actually listened to until now. At the perfect time in the dead of winter for an obsessive music consumer feeling stuck in the doldrums of limited new releases, the band released their first new album well over a decade. I found myself stumbling upon Years and giving it a shot.

What I knew about Criteria was their connections to Cursive and Saddle Creek which colored my thinking before I hit play on Years. I give this by way of background because I have no comparison for previously released Criteria music so when the giant Baroness-esque riff hit on “Agitate Resuscitate,” my expectations immediately were turned on their head. Just a few tracks later on “We Pretend,” I found myself questioning how I hadn’t listened to this band. “We Pretend” grooves in and out like a later-era American Steel by way of Morrisey’s Years of Refusal.

The album delivers this way throughout. Years mixes big eccentric guitar riffs that float through tracks in chunks of sound with nervy grooves and anthemic vocals finding home in 2000s indie-punk. This sounds like a celebratory rock record. This is confirmed in tracks like “We Are. We Are. We Aren’t.” where bandleader Stephen Pederson announces Criteria’s return with a joyous proclamation of “This reign in is ours!”

It's a fitting clarion call with Years’ Julius Caesar inspired cover and references throughout the album. Many of the tracks deal with self-determination and a call to greater purpose acknowledging the tension within that fallacy. “The Saint” settles that tension by saying goodbye to callous advice acknowledging “I know it’s long / And it’s hard / But the road less traveled / Is way more fun.”

It’s not possible for me to judge Years in the trajectory of Criteria’s career given the album being my entrance to the band. But if you are just tuning into Criteria at this point, Years is as good a place to start as any.

Leeched: To Dull the Blades of Your Abuse

CapGun Heroes: Who The Fuck Are These Dorks?!