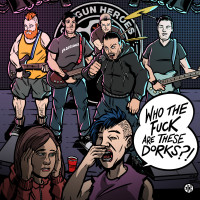 There is nothing more satisfying as a fan of punk rock and music in general than being blown away by a new band that virtually came out of nowhere. Such is the case with Chicago’s CapGun Heroes. This band is made up of Midwest scene veterans. I have seen the band name on flyers over the last few months. The band has recently dropped their debut EP which is a short but sweet 5 song banger that will take you back to all the 90s all ages shows you grew up on.

“Nuthouse” opens with a very recognizable pop punk guitar lead track. Soon after, the song kicks in with searing almost street punk style vocals which make for an effective contrast. This tune boasts a catchy chorus as well as a bridge that has a call and response vocal pattern. This track would make for a great set opener. The next track is a total throwback to 80s US hardcore. “Take My Shit No More” is the EPs most aggressive track both musically and lyrically. One is easily reminded of early Queers, Angry Samoans and Adrenalin OD. “Judy” represents all that is good and holy with the classic Lookout Records sound. This one instantly reminds me of the Riverdales in both sound and production. This fun track tells the tale of a long-lost punk rock girl who now rocks out to a different tune. I can certainly relate as a 45 year-old myself. The highlight of this release comes from “Story of You And Me” which easily could have been an alt rock 1990’s radio hit. This song has everything one could ask for in a pop punk song. This catchy track has both an ALL and Descendents tempo and is complete with enough “whoas” to please any Misfits or Ramones fan. Finally, the EP closes out with “Suburban Lie” which is the deepest track lyrically. The contrast here though is in the melodies which are very steady and catchy. This is another pop punk gem which could have been a hit.

The resurgence of pop punk has certainly spread in recent years and has made an obvious stop in the Windy City. I expect to see more bands develop out of the Midwest, and beyond, as time goes on. CapGun Heroes have captured the 90s sound effectively, and not just for nostalgia. This is the real deal and I extremely look forward to their further efforts.