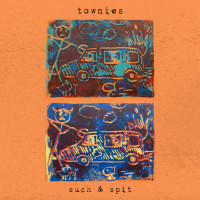 Here’s the easy, “Review if you like” points of comparison for Townies’ 2020 ep, Such & Spit: if Pears or Direct Hit made a Fenix, TX record, this’d be it.

Here’s the harder part: Townies don’t really sound much like=Pears or Direct Hit, but they do come at their five songs of sincere, emotionally complex pop-punk with a similar any-genre-will-do-for-a-moment attitude. This is probably most cleanly illustrated on the EP-opener "Ballgazer" (which I assume I'm to understand as "ball gazer, one who gazes at balls," but I prefer to think of as "ballgazer, pronounced BALL-ga-ZUR"). The track is almost like a modern punk bingo card going to a full board; you've got your "you kids and your music" spoken-word opener (we, as a culture, don't talk enough about the lasting influence of Twister Sister's "I Want To Rock" music video), your "Oi! Oi!" chants, your vaguely Ramones verse construction, your head nod to hardcore / metal via an incongruous breakdown, and your dual- and triple-vocal choruses, with one cleanish and one really screaming. Collect your prize at the door, boys.

That said, the true spirit and ultimate success of Such & Spit lay in it's homage to the Drive-Thru records heartache and sincerity of mid-aughts pop-punk. That plays out in the 90s-alt rock bass lines that anchor and propel songs like "About Face" and Joe Flacco." It's right on the page in the vocal arrangements on "About Face," which are loud enough to convey the sense but distilled enough that one can't easily make them out. The text is obscured to highlight the emotion of their performance; hurt but not open, feeling but guarded.

For my money, the highlight here is "Granite State." This is the one with the twinkle-emo opening, with the post-hardcore arrangement, with the drums going Full Cymbals, with the vocals staying (mostly) flat and plainspoken, letting the instruments do the heavy lifting. It's the kind of track that dips its toe into melodrama without ever plunging fully. "Joe Flacco" stands out as well, aided by its comparative space and pace. Townies pack a lot into their five songs in 16 minutes, and while it rarely feels wasted, the track provides the kind of breather that'll encourage a person to go back to the start.

CapGun Heroes: Who The Fuck Are These Dorks?!