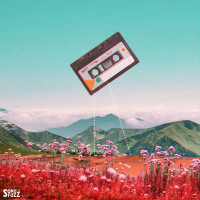 One of the ways to measure the perfection of an album is to apply the "no skips" test: can you listen to the entire thing without skipping a song? If yes, it might be perfect.

This test, like all tests, is not perfect. For example, you might listen to German composer Nils Frahm's 2019 piano album All Encores from top to bottom while writing a couple record reviews for a certain genre-specific website you occasionally volunteer for (just as an example). Does that mean that All Encores is a perfect album, or is it just a perfect album to listen to while you're pecking away in a word document? Is there really any difference between the two kinds of perfections?

These are the kind esoteric, existential, borderline obnoxious questions that come to mind when listening to Sonic Fuzz's self-titled album, a jaunty and deeply consumable collection of steady rock songs that made me feel like I was road-tripping with a handsome stranger through rural Nebraska at sunset. Even calling this thing an album may be applying the wrong language. Sonic Fuzz is more of a tone-poem, focused on flattening out a wide swath of American rock postures without raising one's heartrate. If you want to do the work, you can hear elements of southern rock, blues music, Northwest indie rock, cowpunk and folk reflected in the album's eight songs. You can also just let the fucker play and think about something else, smooth as it is.

Sonic Fuzz achieves this affect by employing an effective, but decidedly limited set of aesthetics to its songs. The drums are rudimentary, workmanlike, and straightforward. The guitar has one tone, and while it'll find slight augmentations within that tone, it never rises about what one might consider "sleepy," the vocals match that same ideal, rarely and only slightly drifting above a mutter or a mumble. It makes for a laconic listen, but the plus side is that nothing feels wasted. Sonic Fuzz has edited out all the frills and what remains are relaxed, slightly skewed slow-rock cowboy songs.

If you're looking for illustrative examples, "Matterhorn" or "Hi, How Are You?" are good stand-ins for the album's overall vibe. The lyrics are vaguely lovelorn, vaguely psychedelic. The song structures are vaguely 90s, vaguely southern, comfortable with running on for a few more bars than needed to keep the established vibe going. If you're looking for an outlier, "Anything You Want" is as close to urgent as this thing gets, but it gets there via bongo drums and guitar solo that sounds like a frown instead of a friendly sigh.

Some albums want to pummel you. Some want to love you, to hurt you, to swallow you. Sonic Fuzz is not concerned with any of that. It wants to sit with you, and it doesn't really care one way or the other if you want to sit with it. Some people are drawn to that kind of formless aloof confidence. Some find it a maddening waste of time. It's a perfect record, unless it isn’t.