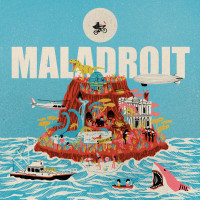 France’s Maladroit, featuring members of the leftist punk band Guerilla Poubelle, started as a side project about ten years ago. And since then, they’ve released 3 EPs, 2 albums, and 3 split records. Their newest release, Steven Island, features 4 songs, all of which somehow or another reference various Steven Spielberg flicks, though they are not a simple retelling of the movies they’re based on.

These tracks, sung in English rather than French, are a far cry from what Guerilla Poubelle usually focuses on. “Darwin’s Got Our Back” points out an irrational fear of shark attacks with lines like “selfies kill more idiots than sharks every day.” “Raptor Lover'' offers a quick, slightly different take on bringing dinosaurs back to life. “Exploration Team” references Indian Jones with lines like “after a hard day facing snakes and giant stone balls, drinking by the firepit…” And “Communication Fuck Up” rounds out the EP, presenting a different perspective on E.T.

The record bounces back and forth between vocalists, each offering a unique delivery and a little more flavor. Till’s vocals are gruff and powerful as can be expected from the Guerilla Poubelle singer. On the other hand, Olive’s voice is more on the poppy side, in the same vein as The Copyrights or Masked Intruder. Though they are completely different, the duel vocals balance each other out, often times within each song.

Overall, these songs are simple in regards to structure, but that’s sort of the point. The band set out to make a fun little record with quick, witty lyrics paying homage to classic Spielberg themes. Despite the simplicity, there are little nuances throughout that keep things interesting. Every song is tight and well played. All of this makes for a refreshing listen. And as a cool bonus, the EP comes on a one sided 12” with a screen printed backside.