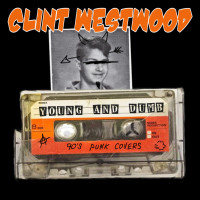 In the 90’s, not too unlike current times, my life revolved around music. While currently my musical life is built upon hearing new bands and reporting back to punknews, the 90’s were a time where I was free to do nothing, save listen to the amazing tunes being pumped out in record number by the EpiFat underground. Strung Out, Jughead’s Revenge, NOFX, Bad Religion, Rancid, The Offspring, (and the list goes on and on) were putting out new records near annually, and my ears were never hungry for anything new. Ah, the good ole days. Now, I find my sonic tastes to be slightly different, but the nostalgia factor is heavy for me, so when approached to take a listen to Mr. Westwood’s Folk Punk take on some of those 90’s classics, I couldn’t say no.

Young and Dumb was first released back in 2017, and has now been picked up for rerelease, with remastering, by Mannequin Vanity records, bringing a little less lo-fi to the acoustic meddlings of a fellow nostalgia whore. The record pops from the start with the classic “Linoleum” by NOFX. While not my favorite NOFX tune, and definitely not my favorite tune on the record, it's clearly the most famous of the songs being given new life, and will probably tug at a larger audience. It’s a fun take on the tune, but nothing one would be shocked at when listening. It sounds like an acoustic version of “Linoleum” (shocker!).

The real goods come from the later tracks, from lesser known bands, where I felt the artist really pushing his creative license, and bringing to the table a sonic fusion of 90’s melodic hardcore, cow punk, and folk punk. The first of my favorite tracks clocks in at number 7, where Clint employs his melancholy impression of one Joey Cape, bringing a downtrodden take of “Violins” which limits the anger the bleeds from Joey’s voice on most records, and leaves the listener feeling the pain of the singer as he longs for his girl.

Directly following it comes my favorite track on the record. Strung Out’s “Firecracker” was one of my favorite songs of my late teens and early 20’s. The song is so fast that it's near impossible to keep up with, yet every lyric seems stained into my subconscious, and Clint takes it to a whole new level. The melding of several acoustic instruments to blend together the speed and aggression of this classic punk tune with the raw emotion of our society in the Trump era were mindblowing. I can only imagine seeing this performed live, and watching smoke pillow from the banjo as it's being played faster than was ever meant to be played.

Other tracks include NUFAN, Propagandhi, SNFU, Bad Religion, Rancid, and RKL, and all of them are done with a level of professionalism that could only be found from someone who loved those tunes as much as I did in my “glory days”. This is truly a love letter to the music that made many of us who we are today. I don’t know what is coming next for Clint, but I’ll definitely be on the lookout for whatever comes next.