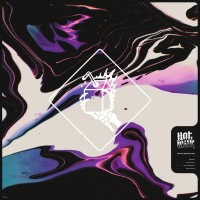 Pop-punk is a science as much as it is an art. Success depends largely on how well one balances the two halves of the genre; too much punk and the big-tent impulses are made too jagged, too much pop and one is fixed in time, toothless.

Hot Milk's Are You Feeling Alive is an instructive example of what I'm getting at. The self-released four-song EP is, in one sense, everything you might want from a pop-punk record if your preferred flavor of the genre's offerings tends more towards the first part of that hyphenate; it's songs are catchy ("Wide Awake" and the title track are particularly vicious earworms), it's production is loaded with the kind of studio tricks that're calibrated for ultimate sheen (all your favorite fade-ins, complete mutes, repeated echo vocals of pivotal lines are along for the ride), it's subject matter is specific enough to be relatable but not so specific to alienate (we're talking heartbreak, mental health, et al).

The hiccup is that the ep's relationship to pop is rooted in a bygone era, and its relationship to punk isn't well-defined enough to drive the compositions. Put it another way; release this album in 2009 and it has the making of a true crossover success story. Throw Hot Milk on a bill with Metro Station and we're off to the races. A song like "Are You Feeling Alive?" feels and sounds like it has more in common with Teenage Dream Katy Perry than it does, say, Lana Del Rey or Billy Eilish. The closest the EP comes to conversing with modern pop music is probably "Awful Ever After," which features some pitch-shifting vocals and a melodic bounce that puts it in-step with the EDM boom of the early 2010s. As far as it's punk bonfires, well, I mentioned Metro Station for a reason.

That's not to say that Are You Feeling Alive doesn't work, or that its songs aren't catchy, or that it fails at whatever its aims might be. Perhaps that specific dating was part of the equation or wasn't part of the equation at all. Perhaps the modern bubblegum chewing kid has no such qualms about where pop music is headed and how punk can come along with it. Intention aside, this is the inherent risk of pop-punk music; if one takes influence from a genre that works in 18-month cycles, one risks being left behind.

The Bombpops: Death in Venice Beach