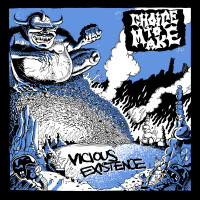 Once dubbed the “most unhappy place in America” as the result of a 2014 study, this grim and downtrodden corner of Pennsylvania has been an unsuspecting breeding ground for notable punk and hardcore bands for decades. The emptiness of the environment stretches the minds of its occupants, forcing them to create with little to work with. Its gloom seems to forge inspiration, and its grisly allure manages to stimulate songwriting substance.

Rising from the proverbial ruin emerges Choice to Make with their no-frills, straight-to-the-point brand of hardcore. Rough and lean with zero flair, the northeastern PA super-group brings together members from the sky-rocketing One Step Closer, local legends Strength for a Reason and the brutally aggressive Worn. Vicious Existence, their first proper release outside of promos and demos, integrates the stylistic elements of each band, welds them together, and files it down to the purest form of hardcore.

The opener, “Disconnect” surges out straight-ahead with its no-nonsense riffs and pit-provoking breakdown. It shoves its way right through into the raging “Fifty Nine,” a direct, verbal assault towards a sexual predator. The street-styled delivery in Nate Preschutti’s vocals comes front and center here, spouting off hate-fueled lyrics with the hip-hop flavoring of late 80s/early 90s NYHC. Fittingly, the track also approaches crossover territory, mixing in the EP’s lone solo.

The record is nine-plus minutes of power-chording speed and judd-judding tempo drops. Its stick-your-chest-out hardcore constructed of minimal ingredients that still create bite. It’s digestible right away without needing to marinate. What’s missing throughout though, are those shout-along, mic-grabbing moments that break the barrier between crowd and band. You do get a taste of this on the hammering title track, but the focus on stomping and swinging rightfully outweighs the need to force gang vocal-ing into their already stripped-down structuring.

Vicious Existence sparks another flickering light on the hardcore map right there in the vicinity of Philly and NYC. It’s another positive for the area that’s held down by nothing but negatives.