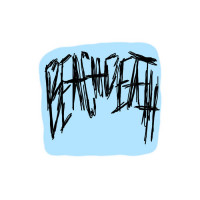 Listen, you're reading Punknews.org, so the odds are good that you can appreciate a song that makes it point and gets the fuck out. Allow me to sing the praises of "Here Come the Drums," the first proper song on Beach Death's self-recorded and self-released 2020 album, via a run-on sentence that will take longer to read than it will to listen to the song.

So what we've got is your standard midtempo guitar strum and floor tom stomp, while a voice, almost imperceptible upon first listening, mutters "here come the drums now." This goes on for about 30 seconds, then, as promised, here come the drums, all cymbals and rolls and crashing and time-keeping. Along with those drums are the clear-as-a-bell vocals, the no-longer-palm-muted guitar, the crescendo that was promised.

Here's the zag: Beach Death is more than Wavves-endebted lo-fi no-wave revival (rest assured, it's also that). At its core, it's a collection of nine songs that probe the boundaries of what a dude, a guitar, a drum set and a laptop can accomplish in minimal time. That means amateurish, but undeniably catchy stabs at pop-punk ("Summertime National Sadness Anthem"), knowledgeable turns at twinkle-guitar indie-rock ("Stupid Love Song"), the best Japanther song since Japanther ("Witchhouse666"), and even a swing at something in the neighborhood of traditional hardcore ("Biting Metal").

That any one of these modes may not be your preferred cup of tea really isn't the point. Beach Death has charm, if not style, enough to carry everything they're shooting for here. In the interest of criticism, let us now establish some high and low points. The song that works least well here, besides two interludes that don't factor in here, is "Prawns," which is a straight-ahead acoustic mope that moves away from the record's strengths (atmosphere, energy) and highlights the weaknesses (lyrics, vocal performance). It gives way to the album's most complete, most thrilling track, "Beach Death," which is a nifty little piece of garage-emo that marries the album's heart-on-sleeve moments with its popgun energy.

As always, your mileage may vary on this collection of short songs, references tracks, and home phone recordings. From where I sit, Beach Death is exactly the kind of record I want to listen to; tomorrow's genre stalwarts, fucking around today.