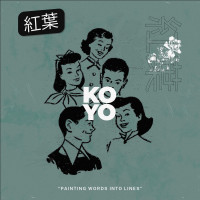 Koyo is a new band out of Long Island, NY. In their first offering, Painting Words Into Lines, the band offers up five impressively written songs that draw from all corners of the punk underground. Koyo, like many other Long Island bands, finds a great balance between melody and aggression in this first release.

The demo’s first song, “Hanging From Grace,” is exemplary in showing the band’s subtly strong guitar work. The guitar tracks in the verses bounce between tightly woven chugging and more ambient harmonics. That's really the first taste of how well the band balances melody and aggression on the demo. The singer delivers staccato vocal lines that complement the speed of the song well. The vocals here show a cleverness in that they don’t delve too far into slow melodies or melodramatic layering. One of the most endearing aspects of “Hanging From Grace” is its simplicity. The musical structure is traditional. The lyrical patterns follow a verse/chorus outline. But put together, the song rings with all the melodic angst that one hopes for out of a band.

The third and fourth songs on the release are the strongest and, perhaps, that’s in part because of their juxtaposition against each other. “Heaven So Heavy” opens with a lo-fi clean guitar that anchors what are easily the most impressive vocals on the release. Here, the vocalist really does shine in staying not only in harmony with the music but also by showing he’s not afraid to be the centerpiece of the song. The song progresses with a driving and ambient tone that builds into powerful choruses reminiscent of the best emo bands of the early millennium. And, unlike those early milleniums emo bands, Koyo sidesteps any sense of 'cheesiness' in delivery here. If ever there was a song on the demo with ‘single quality,’ it’s this one.


And then comes “Dreaming in a Wastleand.” The song opens with a blisteringly fast pace that is akin to the speediness of Kill Your Idols. And even when the song hits the more mid-tempo choruses, the vocals still maintain that speed. The calculated screaming and subtle growling that come through in the vocals makes sense here. The octave guitars give the song an urgency that is made more palpable by the pounding drums and the chugging closure to the track. This one comes in as my favorite, but more because it speaks to my love for fast hardcore than anything else.

What Koyo have offered here is one of the most polished and impressive debut demos in some time. I don’t say that lightly or without thought. The recording is professional. The songwriting is impressive. The vocal delivery and lyrical content are both well-done and mature. Give Painting Words Into Lines a few listens because it really does ring true is a great example of Long Island hardcore’s ingenuitive ability to be at once heavy and melodic. But this demo also rings true with an originality all its own. Very impressive indeed.