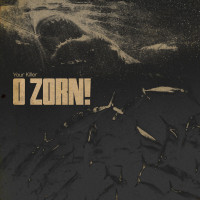 Psychedelic post-sludge isn’t really a genre (or indeed sub-genre) that you hear much of, is it? Maybe I’m just looking in the wrong places, but it’s not a combination that seems to describe that many other bands I can think of. But it definitely fits the slightly-confusingly-named O Zorn! (the exclamation mark is entirely necessary I gather – it relates to the book Watership Down). Built around guitarist and vocalist Bill Kielty and hailing from Long Beach, O Zorn! are initially a slightly unusual prospect. This is their first album to get a proper release, insofar as there is another record that exists, in dark corners of the internet, that is apparently very good indeed. But to be frank, I’ve not had the pleasure of hearing it. That said, when I first listened to this record and gathered it was technically a debut, it seemed implausible. There is a confidence and a sure-footedness in the band’s style that betrays the fact that this isn’t their first rodeo.

Beyond that confidence, the most obvious focal point for this record is its riffs and its weight. I don’t just mean in the typical “this is a heavy album” way, but the literal sense of mass and volume that the sonics of this record carry. From the first time the bass kicks in on album opener and title track “Your Killer”, then the band’s stall is pretty much set out. Huge, towering monolithic slabs of sludge, but with a glistening hint of fragility provided by some quite beautiful lead lines and solos that intertwine with the backdrop as opposed to wilfully thrusting out from it in most instances. Kielty’s vocal style is maybe not entirely usual for sludge, given that it’s more typically ‘hardcore’ in its nature for the most part, though he does vary this with some haunting elongated passages of mournful bellows. I suppose he sits somewhere between Liam Cormier from Cancer Bats and the more shouty end of Dave Grohl’s spectrum. Might sound a little odd, but it works perfectly with the lyrical content. In Kielty’s own words, the album’s theme is ‘Human suffering, in whatever shape of form that may be’. I won’t give you all of them, but some that Kielty cites specifically include war, sickness, hopelessness and homelessness, substance abuse, letting people down and being let down. I think you could argue that thematically it’s certainly a record for our times.

I know that sludge as a categorisation can turn people off by definition, but I would implore you to bear with me here. Most people who I’ve spoken to who sit in this camp reference the glacial approach to song structure of some sludge bands, the lack of dynamics or in some cases, energy. Something that O Zorn! have been able to accomplish remarkably well is to keep the cornerstones of sludge that fans of the genre love, but actually to meld them with some of the tropes of hardcore and then blend in some dark psychedelic influences, too. There are passages of real pace, Kielty’s vocal suits the hardcore tinges well, and there is no shortage of aggression, either. And although there are long, patient, epics on the album (“Cult Status” and the superb “France on Foot”, for example both clock in at over 7 minutes), there are also 3 and a half minute ragers like “Loved” and “Ribeyes”. All told, it’s around 45 minutes, which I think is both pretty much the ideal length and testament to the band’s quality control, because everything on here is good and thoroughly earns its place.

I have to accept that this record might just be the sort of thing I’m predisposed to like, but conversely, I cannot accept that the record is anything less than a success. It’s heavy music with enough subtlety to remain interesting, the performances are self-assured and impressive throughout, the production is stunning (honestly, a thing of beauty if you listen to it in its most high definition incarnation) and above and beyond any of these things, the songs are varied, intelligently structured and affecting. Even as a fan of the genre, I can accept the limitations in some sludge bands, but O Zorn! have thrown off the shackles in a way that simply frees them to do more without moving out of their heartland. I for one applaud the band for turning a series of songs about suffering into something that feels perversely triumphant.