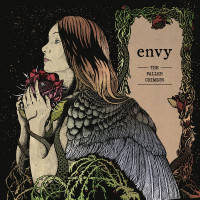 Anytime someone asks me about Envy, I usually point them to the split they did with Thursday a few years ago, and just await the "Holy fuck!" reaction. And 100% of the time, it happens. The Japanese band blends screamo, skramz, post-hardcore, post-rock and bits of hardcore like no one around, and to make it even better, after a major lineup shift, original singer Tetsuya Fukagawa is back to help create a wall of sound unlike anything out there. And while I loved Atheist's Cornea is a work of art from five years ago -- granted, I feel like I over-scored it by half-star -- it's a pleasure to report The Fallen Crimson is just as powerful as anything they did in the '90s and immediate 2000s.

When I saw Fukagawa came back in 2018, I lost my shit. I knew what was to come and this album doesn't disappoint. His style of mixing word-speak and screams has influenced so many bands such as Defeater, La Dispute, Touche Amore and of course, Thursday, and this is some of the band's best work to date. The hardcore-esque opener "Statement of Freedom" is a prime example of the little political edges this record has, working its way around the theme of death and coming off more personal than concept albums of old. I love to how it's not weighed down by overly-heavy sandbags as you have frenetic indie breathers like "Swaying leaves and scattering breath" as well, which I'd expect from Cloud Nothings or Japandroids. Refreshing and diverse, to say the least.

And make no mistake, the way Envy tempers soft lulls to exploding noise, as per "Marginalized thread" and "HIKARI", it's testament to how remarkable they've always been with cinematic offerings that range from melodic and charming to chaos when you least expect it. Seriously, if you haven't jumped in and if you love bands like Godspeed! You Black Emperor, Mogwai and Explosions in the Sky, the warm soul-soothing tracks here will really win you over. "Rhythm" alone with Yoshimitsu Taki is something to take note of because apart from its beauty, it's their first female-sung effort and trust me, it's worth its weight in gold.

Bite in because like I said, it's got something for everyone, even punk fans as per the Strike Anywhere-like "Eternal memories and reincarnation". The language barrier won't be a problem because this kind of poetry transcends that and sinks its teeth into your spirit in the most unimaginable way. And with many of us so isolated and separated right now, when you go through Envy's discography, you're going to be in for a treat. This record will be the icing on the cake as it's one of their most accessible, modern novels ever.