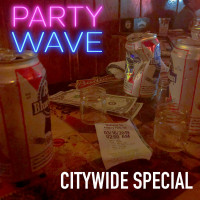 Gameface. Sludgeworth. Hell, even The Replacements.

If I’m pulling subtle similarities from these bands out of a simple verse and chorus, you then, Party Wave, have me intrigued.

The Asbury Park trio breed a brand of Americana-flavored punk rock rooted deep beneath the weathered boardwalk. It’s positioned right where it can catch a ray and grows up and through the cracks feeding on a salt-of-the-Atlantic charm. Their debut EP, Citywide Special, doesn’t harp on nostalgia but instead takes you on a hearty, pop-infused ride around the shore town navigated with a locals-only vibe.

Defending the culture and character of their hometown against vacationers and gentrificationers is important to Party Wave, and is outwardly expressed in their battle hymn “Imposter Syndrome.” Simple and streamlined, and where the emo sensibility of the aforementioned bands shines the most, the track is powered by their hooky war cry, “You’re not from here / You don’t know.”

“Last Night’s Party” is a punchy, drunk-love head-bobber, which may have very well originated from their own neighborhood haunts. “Bond Street Breakdown,” slowed down and carried with honest vocals, is the setting for one of those neighborhoods, a 'hood that contains one of those tightknit community joints, like the Bond Street Bar, where PBRs and hometown comfort are served up to the locals. The song depicts both the physical and emotional struggles of an environment that’s seen its fair share of perfect barrels and unfortunate wipeouts.

Mid-tempo closer, “Ten Dollar ATM,” rips it up with the cachet of earnest Midwestern punk from several decades ago. It peaks with the climactic “Oh, I know that we’ll get by / We’ll work until we die,” that brings the record from swell to shoreline.

In a sea full of grit and gruff, Citywide Special delivers smooth sincerity with a blue-collar spirit. It’s refreshing and packs in peer-driven energy that’s digestible and downright fun. Grab your board and drop in.