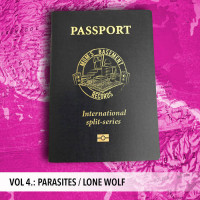 Mom’s Basement Records has been delivering the goods to the pop punk world for roughly five years. With this new release, the label continues it’s 7” Passport Split Series which pairs an American band with an International band. Previous editions featured bands such as Horror Section, Grim Deeds, the Putz, and the Windowsill, amongst others. For those into underground pop punk, the 90’s were dominated by American bands such as Screeching Weasel, Queers, and Mr T Experience. At the turn of the century, the scales were tipped in favor of International greats such as the Manges, Apers, and countless others. This Passport Split Series helps showcase what the pop punk world has to offer regardless of country of origin. On the latest incarnation, American pop punk veterans the Parasites are paired with Lone Wolf from the Netherlands.

The Parasites side starts strong with “No Sleep Tonight.” Dave Parasite’s signature guitar leads kicks this one off. Catchy vocal patters soar over hard-hitting drums and a moving bassline. The effective pre-chorus features additional percussive instrumentation as well as backing vocals that fit like a glove. Like most well-known Parasites classics, this track contains a guitar solo-laden bridge prior to the outro to the song. Next up is the heavier rocker “Nowhere Near Me” which is not the usual tempo and tone for the Parasites. The fast intro riff is the predecessor to a more aggressive vocal approach. The pre-chorus contains well-placed whoa’s leading into the catchy chorus. The bass is moving along at rapid speed throughout the track as well. Dave Parasite usually longs for love and affection. On this though, the goal is to stay as far away from the subject of the song.

Lone Wolf from the Netherlands are a newer band featuring members of bands such as the Apers, Bat Bites, and the Accelerators. This band complements the Parasites very well on this release. “Meet Me In The Middle” kicks off their side and takes me back to underground 90s alternative rock. This steady rocker features a fuzzy shoegaze guitar tone. The track’s chorus contains a cool and effective quick tempo change to make things interesting. The male backing vocals complement Merel Schaap’s lead. The follow up track “After Dark” is more upbeat compared to the first track. The twangy guitar tone carries this track. “After Dark” ends with a lengthy outro that seems a little out of place at first but works.

If you have been curious as to the current state of underground pop punk, then I would strongly suggest this release, as well as the other volumes of the Passport Split Series of singles. This genre has seemed to ebb and flow throughout the years. For those paying attention, there is indeed a strong resurgence and renewed interest. Luckily there are many long running bands as well as newcomers who continue to carry the torch for pop punk.