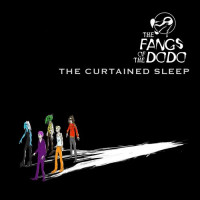 Fangs of the Dodo

Few things are more polarising in the wider rock scene than a band emerging who have very clearly already spent a lot of time on their aesthetic. Some people cite the Damned, the Misfits and more recent purveyors of the black-and-purple spooky punk of MCR and Alkaline Trio as examples of how this approach does not always denote style over substance. And whether you like them or not, Ghost are playing arenas these days, too. The most obvious and relatable example from the UK in recent years is Creeper, whose debut album Eternity, In Your Arms was a critical and (relatively speaking) commercial success. Not something often seen in debut rock albums these days.

You might have cottoned on by now that Fangs of the Dodo, hailing from Bath in the UK, are very much of this lineage. But even more so than most of those mentioned above; recent single “Crime of the Century” with its Nimrod-era Billy Joe Armstrong vocal inflection, innate melodrama and hook-driven structure is looking like something of a calling card, given that the accompanying video depicts each of the band’s five members as their quasi-supervillain pseudonyms: Count Dodo (vocals/bass), Cinder (vocals/keys), The Prisoner (guitar/backing vocals), The Guardsman (guitar/backing vocals) and Hazard (drums/backing vocals). On initial viewing, I confess that I found it all a bit dayglo and maybe a little Gen-Z-baiting for my tastes, but then frankly, Fangs of the Dodo’s target market does probably lie primarily in that demographic, so I can’t really criticise them for that. Also, credit where it’s due, the press notes included a few incredibly cool Frank Miller-esque stylised pictures of the band, complete with individual accent colours a la Sin City. So yes, they’ve committed to the look, I’ll give them that.

As I’ve already mentioned, the first thing that struck me was the band’s dramatic approach, radio-friendly lead single and fully-formed aesthetic. Which as a man in his mid-30’s I was slightly suspicious of, I’ll confess. Oddly enough, it’s after that first song that things started to change for me. Second track “Safe” is a far more nuanced affair, with what feels like a less affected vocal, which allows the knack for vocal melody and hooks that Count Dodo (I feel a bit stupid writing that, I shan’t lie) has at his disposal to come through in a less grandstanding way. There are moments of patience and quiet, subtle keys that gently vie for position with lead guitar lines that are lively without being overbearing. In short, to my ears, it’s a far better song than the first. The EP’s midpoint is another left-turn insofar as ‘Cinder’ takes lead vocal duties on, and she is more than up to the job. In style and timbre she evokes Marissa Paternoster of Screaming Females more than anyone else (never a bad thing) while the band give their most punchy performance thus far, with a post-chorus that begs for its ‘Woo-hoo’ to be sung back by an audience and even a well-constructed breakdown at one point. So my scepticism may have been misplaced.

Stopping just short of a full track-by-track analysis, the next song up, “Home” is a cinematic piece of rock music that does what it sets out to do (pensive introspection followed by a rallying cry of a chorus) with perfect competence without being necessarily breathtaking, whilst closer “The Cause” serves as a mini-epic to bring things to their denoument. The band’s innate melodrama remains front and centre, there are moments worthy of note from each member, and the song’s near-6-minute length allows the band to explore their various areas of strength in a single song for the first time. Whether the breathy vocal outro is the strongest way to actually finish the song is debatable, however.

Look. If you’re into Black Flag, Circle Jerks and DOA, then I don’t know if this is going to be for you. But if you’re into AFI, MCR, Creeper, et al then I recommend you give this some of your time. It’s only the band’s 2nd EP and if I’m honest it’s their versatility that excites me more than anything else. I don’t know that I’ll spend much more time with this EP in 2020, but I bet a lot of people will. Mostly the young’uns I’d wager, but I’ll still be keeping a keen eye out for the debut album when it comes along. This sub-division of punk isn’t for everyone, (cue people telling me I’m a dick and that this isn’t related to punk in any way) but it’s part of the modern pantheon and I’ve heard it done a lot worse than this.