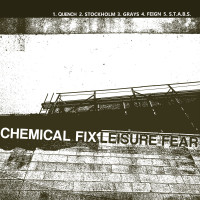 “Leisure Fear” was recorded over a year ago, and Chemical Fix have built themselves on the strength of the recording. The 7" EP bursts with energy and power. Sonically, the band combines grooving and distorted rock and roll riffage with hyper-aggressive vocal stylings that immediately draw comparisons to The Suicide File and (what I’m sure has already been said ad nauseam) American Nightmare.

The five songs on “Leisure Fear” all clock in at under two and half minutes long, which should clue you into the speed at which the band plays. There’s an interesting mood developed with such brief but commanding songs, and Chemical Fix harnesses that mood really well. “Stockholm,” the EP’s second song, gives us the full gamit of Chemical Fix’s sound. Speedy horse-hopping verse riffs are harnessed by cymbal-driven. The vocals cadences move as quickly as the music, and the harmonic work in the bridge gives the listener a bit of dynamism before the song’s closing breakdown. Here, the song breaks into a driving chug-chug of mosh. However, said mosh part isn’t over the top or anything too Neanderthal. It fits the band’s passion and power without being cheesy.

“S.T.A.B.S.” is the standout song on the EP for me. The guitars move between frantically fast verses that draw me to a Rorschach or Born Against vibe only to slow into a groovier and more modern hardcore vibe that pulls out the band’s aggressive tone. But it’s in the song’s closure that the music really shines. The guitars open up into ambient riffs as the drums offer looser beats, and the bass comes to forefront. The dissonance here is perfect to close out the EP. It’s haunting and it’s powerful. Lyrically, the song tackles the state of American politics and it does so with a sense of disenchantment and despair that pairs perfectly with the music itself. “Your failure state” indeed.

This is a very impressive 7” EP from Chemical Fix. The band bridges the noisy hardcore punk of the late eights and early nineties with the best hardcore sounds of the early millennium. Yeah, I know that’s a lot of temporal code. Whatever. I’d rather not make any more direct band comparisons. Chemical Fix’s “Leisure Fear” is absolutely worth checking out. Punk. Hardcore. It’s all there. A strong release from a Philly band that I imagine we’ll be hearing much from sooner than later.

Fangs of the Dodo: The Curtained Sleep [EP]