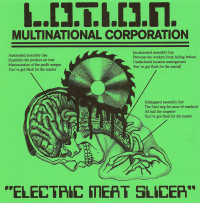 L.O.T.I.O.N. writes awesome tales of future dystopian horror except for the fact that the songs aren’t so much “future” as they are in the here and now. “Electric Meat Slicer” is their newest tune and the band feels it’s important enough to warrant its own flexi- it is. In fact, a twelve inch vinyl single of this track would probably be even more fitting.

L.O.T.I.O.N. likes to walk the line between an ’80 tongue-in-cheek look into the future and a true analysis of what may come to pass (or what already is.) “Electric Meat Slicer” firmly in the anarcho-punk camp theory wise and, frightfully so, that theory is turning out to be reality. The track details how most human beings spend their entire life literally working their flesh away for corporate master profits: “Automated assembly line / Expedites the product on time /Maximization of the profit margin /You’ve got flesh for the master.”

Just as many minimum wage “essential workers” are literally being ordered to risk their life during the COVID-19 crisis, the band argues that most rules and regulations aren't for safety - they're really just to maximize profits. And if you don’t believe the band, look at the many minimum wage workers (or close to minimum wage) who are being ordered to work as “Essential Employees” – clothing store employees, arts and craft store employees, convenience store employees. It’s clear that the stockholders in these situations are using COVID-19 to drive their profits and are doing under the paper thin guise of “helping the community.” As L.O.T.I.O.N. states: Subjugated assembly line / The final step for most of mankind /All hail the emperor

Musically, the band still pulls from Crass records, early industrial, and synth weirdness. Surprisingly, “Electric Meat Slicer” is somewhat more ambient than the pounding tracks heard on their last album. The driving synth here sounds like it was adapted from Night Rider while the howl of singer Alex Heir is more an ominous hiss than his usual rage growling. The band is expanding while keeping the underlying terror in their tracks.

Obviously, “Electric Meat Slicer” was written before the COVID-19 crisis erupted. But, sadly, it pairs perfectly with the current crisis and subsequent corporate actions. It would be a lot of fun to see how the band can so accurately foresee the future if only the future wasn’t so grim right now.

Screeching Weasel: Some Freaks Of Atavism