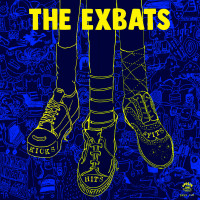 Kicks, Hits, and Fits distills the ExBats into their core elements. Throughout the band’s history, drummer/singer daughter Inez McLain and guitarist dad Kenny McLain have toyed with junk culture, AM pop, punk rock, and metaphysical musing. They’ve got numerous songs about Kevin Sorbo and Lucy Lawless. They’ve got a song about having a mom who is too cool. They write about Charlie Watts like he’s a Tigerbeat magazine centerfold. But here, they take their flirtation with bubblegum media and bend that towards something universal. True, they’ve been doing that all along, but here it comes into focus.

Check out “Funny Hunny.” The tracks is so bubblegum that it would make The Archies throw away their instruments. It may be a bit of a mid 60’s throwback, but it’s also speaks to a collective feeling of infatuation all while hinting towards the feeling when infatuations evaporates. Or if you don’t buy that, look to “Good enough for you,” where Inez admits “I was good enough for you… but now I’m good enough for me.” It’s a raw emotion to put one’s (former) lack of self-confidence on display, but it ‘s also charging to also share in that feeling of overcoming a personal hurdle.

That being said, this isn’t all about “self care.” The band reaches back to their earliest rapscallion days on “Doorman” where they talk about wanting to jack up a doorman just because he won’t let them in a club- in fact, on the driving punk tune, the band comes off as the bad guys and really, that’s fun. Just as the Circle Jerks were morally ambiguous on “Deny Everything” and just as the Dead Kennedys painted a complex picture with precious few words on “Stealing People’s Mail,” the ExBats express a certain anger without trying to justify it. That takes bravery and skill and the band has what it takes. In part, newish bassist Bobby Carlson helps by adding a driving whomp and, perhaps, a sonic clarity the band didn’t have before.

As before, the band draws from both Sunset Strip pop and first wave pop throughout the release. Thankfully, they don’t go for full throwback, and instead, draw the warm melodies and striking attacks to make a composite that suggests certain influences without painting them out.

Perhaps, most surprisingly is that many of the band’s odes to junk culture (argued as a sort of high culture) is absent here. Frankly, their adulation of Hercules: the legendary journeys was a lot of fun. But in that absence, something becomes apparent. Whereas they used to use Herc’s Iolaus as a proxy for their own heartbreak, yearning, and metaphysical musings, now, they talk about it directly, unguarded. “Now, that takes guts. But, it also pays off. Check out “Immediate Girl” where Inez gives Grace Slick and Rodney Anonymous runs for their money when she calls out “You’re an immediate girl in a fucked up world.” Then just wait until Kenny comes in with the crashing, broken guitar solo.

This is a band speaking to fundamental truths with honestly, clarity, and perception- and they make it look easy, which it isn’t, mind you. For example, prowess disguised as simplicity is something that Charlie Watts perfected in the Rolling Stones. So, with that in mind, the closing track makes a lot more sense. That song’s title? “I got the hots for Charlie Watts.”

Screeching Weasel: Some Freaks Of Atavism