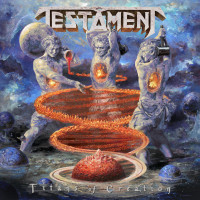 The headlines should be reading “Testament Continue Their Streak of Rock Solid Thrash Records”. Instead, we’re getting “Chuck Billy Survives CV-19”. Don’t get me wrong. I understand. This fucking virus has completely taken over all of our lives.

Let me backup a bit. A few weeks ago, Testament were headlining “The Bay Strikes Back 2020” tour across Europe with fellow thrash legends Exodus and Death Angel. (We can only hope that they do a US version of the tour with this dream lineup.) It seemed to be going very well. Shows were selling out. Eurotrash headbangers were giving rave reviews. Then all hell broke loose. By the time the final dates of tour were cancelled, several members of the bands and crew were infected.

The good news is that Testament singer Chuck Billy and Exodus guitarist Gary Holt seem to have fully recovered. (Billy has already survived cancer, and would seem to have been especially vulnerable.) Death Angel drummer Will Carroll is still hospitalized, but seems to be out of the woods.

Anyway, let’s talk about Titans of Creation. Testament’s 12th proper studio album finds the band still at the top of their game. The quintet has been experiencing a major resurgence since the return of hotshot guitarist Alex Skolnick in 2005. He joins mainstays Chuck Billy and guitarist Eric Peterson as the key songwriters. The rhythm section is once again made up of metal drummer extraordinaire Gene Hoglan, and highly respected metal journeyman bassist Steve Di Giorgio. Testament are essentially a thrash supergroup at this point.

Titans of Creation comes four years after Brotherhood of the Snake, which was a solid effort, but felt like a slight step down after the excellent The Formation of Damnation (2008) and Dark Roots of Earth (2012). Titans feels much like Brotherhood. It’s consistently good, and occasionally amazing. The unwieldy run time works against it. 12 songs and 58 plus minutes force it to be spread over two LPs. That’s a lot of flipping, if like me, vinyl is your preferred format.

There are definitely plenty of memorable songs on Titans. Opener “Children of the Next Level” is a six plus minute thrash epic. Ditto “Night of the Witch”. “City of Angels” is the longest track on the record at close to seven minutes. It incorporates lots of melody and politics, and is another highlight. “Dream Deceiver” feels like an ‘80s metal throwback, think Dokken or Dio, but for some reason it works. “WWIII”, and the ironically titled “Symptoms” are tight, sub five minute thrashers. “False Prophet” and “The Healers” recall Testament’s earliest material. Think fan favorite “The Preacher”.

Parts of Titans get a bit bogged down, especially toward the end. Closer “Catacombs” is even a little cheesy. That said, there are many more moments of sublime heaviness. There are also some playful, rock and roll elements that feel like an entirely new trick for this 35 plus year old band. Titans of Creation is an enjoyable listen, and is going to be an essential purchase for all self respecting thrashers. It’s definitely another worthy addition to the already impressive Testament catalog.