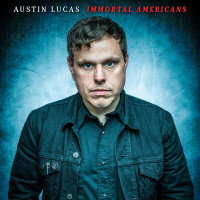 There was a time when it would have been unthinkable for an Austin Lucas record to go unreviewed for two years on Punknews. All the Orgcore singers had found acoustic guitars and were singing about flannel and burritos. It was a good time to be a country/bluegrass/roots music kind of guy with some punk rock bona fides in your back pocket and Austin Lucas was that guy.

In the decade since, as the eyes of the Org turned elsewhere, Austin kept plugging along. He went electric and brought a little bit more of the capital ‘C’ Country into his sound. He experienced more than a handful of upheavals in his personal life and wound up back in his hometown of Bloomington, IN. All that change and travel come together in Immortal Americans. Produced by Lucas and Will Johnson and recorded by Steve Albini (there’s that punk cred!), all the songs were done as complete takes, mostly with a full band. Musically, Lucas goes back to mostly acoustic instruments, including his father playing the banjo, and succeeds in keeping the sound of the record organic and raw; a nice change up from the Nashville sheen of 2016’s Between the Midwest and the Moon.

Lucas has held onto a few tricks from his electric country phase. For example, he’s liberal with his use of steel guitar, and even with a stripped-down band you can clearly hear how he’s grown in his production on top of the songwriting talent that was always present. “Killing Time” is classic toe-tappin’ country that reminds me a bit of Willie Nelson (cow punks can feel free to yell at me in the comments) while the title track and “Monroe County Nights” show off Lucas’ skill for playing with dynamic changes within a song.

If you’re like me and you miss the days of Somebody Loves You, you too are in luck as there’s plenty on Immortal Americans that feels like a throwback. “Between the Leaves” especially cuts away the other instrumentation and goes back to just an acoustic guitar and Lucas’ fantastic voice. “Goat and Goose” lets the banjo come forward and hearkens back to the era of Putting the Hammer Down. The song that stuck in my head and is maybe the standout of the album is “My Mother and the Devil”. Walking the razor's edge of religious fervor without wandering into the mire of preachiness, its lurching stomp chorus, juxtaposed with the incredibly spare verse, feels like both the pinnacle and an encapsulation of the record.

Whether you’ve been a fan of Austin Lucas since the early days, or you’ve climbed aboard late in the ride and have somehow missed this record going on two years now, Immortal Americans will have something that appeals to you regardless of what it was that first drew you to Austin Lucas and for those of us who may have wandered away, it’s never a bad time to revisit.