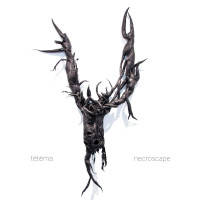 Many years ago, I was the assistant engineer on a mixing session. In a moment of oversight at the patch bay, I accidentally routed an effect return back into itself. The sound it created was ghastly, but at the same time unique and intriguing. For the couple of seconds I heard it (before the infinite loop I’d created made the monitors explode; the sound of which was far less appealing), I thought to myself how great it would be to sample that sound and use it on an album.

All this time later, my technical skills have definitely improved, but more importantly, the guys in tētēma seem to have taken my idea and run with it on Necroscape. Ghastly, unique sounds abound, for sure, but so do many familiar ones. Comprised of avant-garde composer Anthony Pateras and Mike Patton of [[Faith No More]] and [[Mr. Bungle]] fame, tētēma pushes the boundaries of experimental electronic music. The structure of the music can’t be efficiently compared to much else, as the very idea of structure seems to have never been considered. There’s too much else happening to waste time on such a silly little concept.

Though you’re likely unfamiliar with Pateras, the wide range of Patton’s vocal work over the decades should give you at least a surface scratching idea of what you’re in for on Necroscape. There’s not many styles of vocals he hasn’t shown proficiency in, and that versatility is foundational to the album. It becomes quite clear right from the start that Patton and Pateras were born to work together. Pateras creates a new universe for each of Patton’s musical personalities; be it jazz singer, chanter, rapper, hardcore screamer, and anything in between.

With the notions of typical structure and arrangement being generally avoided, layers and diversity become tētēma’s foundation. The two artists clearly respect each other’s range, but they also make themselves work for it. A pulsating synth wave can lead up to blast beats underneath a classic rock vocal, only to fall off of a musical cliff into an interlude of off-tuned strings, layered with muted chants and not as muted screams. A tender ambient jazz vibe melts down into a tribal drum section with freestyle rapping. Anthemic metal, heavy on the guitar, is backed by drums compressed so tightly they’re barely there at all, and a chorus of disjointed saxophones that sound like their bows have been hit with a hammer.

Of course, this fresh sounding cacophony does have its drawbacks. The band seems to run out of ideas after the first side, leaving the back half of the album feeling a bit redundant. It’s an unnerving point to arrive at, too. Six or seven tracks worth of experimental sonic brain teasers grab you by the hair and make you question whether decades of musical tropes were even worth it to begin with, only to then have it all be regurgitated on Side B? Ok, so the innovators and outcasts are finite too; we knew that already. Don’t let that deter you from visiting Necroscape. It’s a world of gloom and of jubilation, with enough new dimensions to discover on each return.

Enemy Radio: Loud is Not Enough