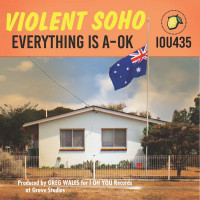 Violent Soho are a band I saw a couple years ago at Riot Fest and after their infectious, energetic performance, plus a hearty recommendation from former 'Org-er Alex Meylink, I checked out their catalog. And they really were worth the hype. I followed up a lot of their videos online and just like my fascination grew for the UK's Basement, the same happened with these Aussies. Mixing indie, alternative and grunge is no easy feat, but with some poppier tones laced in on Everything is A-OK, Violent Soho once more prove they're a criminally underrated act.

Off the cuff, it's like listening to bands like Sainthood Reps, Citizen, Daylight and those attached to the emo-grunge era in the first half of the last decade. Immediately, "Sleep Year" grabs you and with its thick grungey riffs and harsh tone, it feels like one angry record's on the way. Well, it doesn't fully play out that way. Instead, it's a swath of mid-tempo tunes to follow, but done with V.S.' signature style. And it works. Admittedly, I would have liked a few more loud bangers, but what's on tap is more than enough.

From the breezy and aptly titled "Vacation Forever" to "Easy", these are some of the band's most accessible tracks to date, reminding me of when Basement went mainstream and deservedly got a Fueled by Ramen deal. Songs such as "Canada" also have that effervescent '90s blood to them, and the alt. rock style here feels like Weezer meets Everclear, with vocalist Luke Boerdam reminding me a lot of Art Alexakis.

But make no mistake, there are a couple harder turns on the album with fans of Smashing Pumpkins, Sonic Youth, Pixies and another band V.S. adores so much, Nirvana, getting their fixes on tracks like "Pick It Up Again" and "Slow Down Sonic". Melodic, catchy but again, items to mosh to. What's noteworthy too is the songwriting which has an optimistic outlook on life, especially heading out on the road and coming back home -- super ironic in such dour times.

And the irony isn't lost at all on the album title or timing of release, because we do need feel-good music, even if dashed in are splatters of nihilism and cynicism. After all, this album is about us sharing the same air and looking towards better days but again, it could have done with some of the ruthlessness of WACO and what came before. That said, as the slow burning closer "A-Ok" lets you know, just buckle up for those bumpy rides, because in the end it'll all work out.

Enemy Radio: Loud is Not Enough