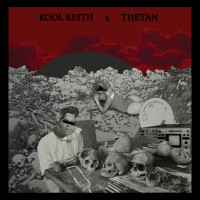 Graduating from high school in 2004, I grew up surrounded by rap/rock. Which, too often, meant rock bands whose lead vocalist bought a House of Pain album and decided they could be rappers since many of them, couldn’t sing. Commercially speaking, those bands were extremely successful. I would have been hard pressed to have found someone at my high school who didn’t own an album by Limp Bizkit, Papa Roach, Crazytown, Linkin Park, or Kid Rock. I would also, likely, have a hard time finding anyone who is waiting on the next release from any of these bands with bated breath. Hardly any of the larger names in this genre, with the exception of Linkin Park, were able to remain artistically relevant. Many of them jumped genres from one album to the next once rap/rock became a joke, some couldn’t keep a cohesive lineup together, and one got the most press they’d had in a decade because they were supposed to play a fake concert at a Sunoco in Dayton, Ohio. Needless to say, when I heard Kool Keith had teamed up with power-violence band Thetan. I was equal parts curious and concerned.

My biggest concern stemmed from Thetan, while being a fantastic power-violence band, they weren’t exactly atmospheric in their approach to music. They didn’t lay back into a groove. To put it simply, they despite being an amazing power-violence band there was nothing about their sound that made me want to hear it combined with hip-hop. After listening to this album, let me state very simply. I was wrong. Thetan does a phenomenal job laying down music for Kool Keith to drop some of the better verses he’s written in years over. Which I am thankful for, because when live instrumentation is done right it brings a new dimension to hip-hop, just listen to The Roots or the MTV Unplugged/ Yo! MTV Raps episode that featured LL Cool J, MC Lyte, A Tribe Called Quest, and De La Soul. Thetan does a phenomenal job of creating atmospheric droning feedback over some really solid hip-hop drumming. Everything about this, especially given Kool Keith’s lyrical content, worked; the music had a groove while still feeling slightly industrial and grimy. It was able to create the sense you were at foreboding dance party for the doomed. Which, given the current state of the world, worked perfectly. Their incorporation of synth also added a dimension to their sound that was either not present, or just way harder to detect, on their straight power-violence albums.

Kool Keith was why I was curious, this guy has been doing it since the 1980’s with the Ultramagnetic MC’s and kept it going since then while creating timeless characters such as Dr. Octagon, Dr. Doom, Black Elvis, Analog Brothers (with help from Ice-T), and working with everyone from Dan The Automator, MF Doom, Mike Patton, and the Yeah Yeah Yeahs. In short, after over three decades in the game, Keith is still challenging himself and trying to expand the limits of hip-hop rather than restrict them to what they were when Ultramagnetic droped their first album, Critical Beatdown, in 1988. While some could argue Keith needs to learn how to self-edit a bit more, there are few MCs who have churned out albums as strong as he normally does even if he does miss the mark, as even the greatest musicians of all time can do.

There are no misses here; Keith is on point throughout this album. Dropping rhymes about space, sex, and for the first time on record bringing many of his alter-egos together. Sure, Dr. Doom killed Dr. Octagon once upon a time, But now he’s teaming up with Black Elvis on “Night Heist” while Octagon showcases his flow on “Let’s Take a Trip.” Before all three characters get together for one of the most interesting tracks of Keith’s career, “Complicated Road Trip.” For Keith, this feels like the culmination of the last thirty years, as he brings many of his alter-egos and their flows out on the same album or even the same track. His writing never misses the mark either, be it lyrically or one some of the skit styled introductions to a few tracks.

For an album that also features a number of guest stars, Gangsta Boo (Three 6 Mafia), Casey Orr (Gwar and X-Cops), Blag Dahlia who founded Dwarves, Ashley Mae (Lost Dog Street Band), and DJ Black Cat Sylvester you never get the sense this isn’t Keith’s album. He’s razor focused even as he brings in other legends from the hip-hop, punk, metal, and country. You get the sense that Keith sat down, realized what he wanted to do, found the right people to do it, and pulled it off better than he has since Black Elvis came out just over two decades ago. It’s the perfect album if you feel the need to shake your ass while feeling like the world is about to end. It’s also the perfect album to make you forget you feel that way.