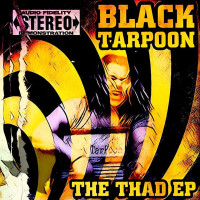 I’ll admit that when I was first given this EP, I had no clue who this band was, and was on the verge of skipping it, based solely on the one person I asked if they knew anything about this band. I’m quite pleased that I chose not to take the word of one without ever listening to a band. Being the only Punknews writer covering Folk Punk, I get submissions through Facebook, Twitter, Instagram, etc near daily, and it's honestly more than I can handle, so I’m sure great bands miss their opportunity for me, or possibly anyone, to have an honest opinion delivered in a public manner. Luckily, it was only three tracks, and the person who sent it to me seemed like a good guy, so I gave it a listen.

While I know very little about the band, my research indicates they hail from Corpus Christi, Texas, and branded themselves as a horror hellbilly band, but I’m not certain I really agree with their self-described classification. The first of the three tracks, and all of Side A, “Sarita”, is actually a beautiful country inspired Americana song. The melody flows near perfectly with a gentle singer layering their vocals over very peaceful sounds created with their various stringed instruments and a drummer that has more restraint and control than I’ve heard in some time. THere were several spots the drummer could have gone into a slamming fury, but the song called for the mellow rhythm, and with it soft, but firm beats brought the orchestration together.

The B Side has two tracks, starting with a track titled “Gloom”. The tempo picked up quite a bit with this track, but it still lacked the overt grit and growl that you nearly always get in the Folk Punk genre. Don’t get me wrong, there were several moments where the vocals moved from a classical clean vocal to a slight growl,but it was used as an additional instrument, and savored for the perfect moments. The sounds of both of these first two tracks were not only surprising, based on my experience with most random submission requests for review, but emoted a sense of pop-punk meets americana, which sounds awful to me when described like that, but these guys took it and made it something that really works. These first two tracks were beautifully written, and executed to perfection. No hokey hellbilly nonsense, nor either of the two typical folk punk vocals (either whiney/angsty or so angry you can’t understand a thing), nor a poppy “let’s please every schoolgirl” hook like pop-americana bands (Lumineers, Mumford and Sons, etc), but instead it was well written music played by artists who actually know how to use their instruments.

The last track, I found during research, is the previously released “He sleeps with fishes”. This track is the closest on the EP to a “punk”, “hellbilly”, or “Folk Punk” song, but even though they seem to be falling back on a formula that appeals to a specific group, they do so in a way that is not off putting to someone like myself who wouldn’t normally throw on a Social Distortion or Tiger Army (I don’t know a lot about rockabilly, so these may be horrible examples). The hook is simple, and the melody picks up in tempo, but despite being a simple and formulaic song, for the genre, it actually stood out almost as much as “Gloom”, which was by far my favorite track on the EP.

Obviously, these guys aren’t a band that I would have normally championed, but due to happenstance, I ended up listening, and actually enjoying this short little 7”. I’m not sure what the future holds for these guys, but I’ll probably keep them on my radar, so long as they keep putting out the more melodic tunes that started the EP, as it was extremely impressive. This is one of those bands that could either fade to obscurity or somehow blow up and be playing stadiums, which is always fun to keep an eye on. The songwriting on the first two tracks was easily as good as anything the Lumineers have put out (not that I like anything they’ve put out, but objectively speaking). I definitely recommend checking these guys out, even if only for the song “Gloom”, as that track was most definitely worth a play.