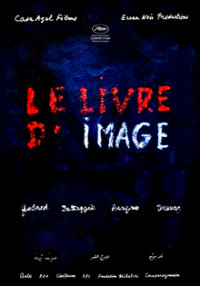 And so, The Image Book. Ever since Breathless in 1960, Jean-Luc Godard has consistently been attempting to pioneer cinema into a greater artform. He carries with him a lifetime of career accolades from across the globe to every film set. With a pedigree so vibrant however, it's easy to get the wrong expectations about Godard's most recent collage-work: The Image Book.

Unlike Godard's narrative films, The Image Book is often humorless and depressingly so. There are no "characters", no plot, no narrative. The only character to speak of is Godard himself who narrates the film. In lieu of "scenes", we are shown paintings, sketches, and movies in micro-bursts. These clips constantly and brutally collide with TV news, internet videos, archive footage, and original scenes captured on the director's iPhone. The result is a series of incredibly charged images that often dazzle, but dissolve too quickly to form much of an impression.

It would be easy to discuss the free-associative possibilities with the type of images shown in this movie; the visual congruences, their thematic resonances. But from the outset it's clear that there is an anger lurking in The Image Book as well. The anger of a life spent in constant observation of humanity and its tragic patterns.

Over images of bombs and warplanes, Godard says with a tremble,

“Once more, we understood that we didn't imagine that war would end without our victory. War is therefore divine. Who could believe that the victims had shed their blood in vain?"


A lifetime of radical and defiant filmmaking, with seemingly no reassurance that the world will be left a better place than when it was entered.

It's clear that this is a well constructed, albeit esoteric film. But one gets the sense that this is not a creative act for Godard as much as it is a spiritual one. A recounting of his disappointments and pleasures in life expressed the only way he knows how.

The French title of this film, "Le Livre d'image" I am told, translates more closely as "The Picture Book". As in, something a toddler might read. It might be the only funny thing about this movie.