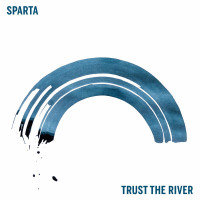 I've been waiting on this album for 14 years, and off the bat, let me just say it lives up to expectations... and then some. Now, while Threes came out in 2006, there's a lot that happened to Sparta vocalist Jim Ward in between then and now, musically and life-wise. A lot of this review actually will incorporate bits of an interview I did with him in 2011 but which I've sadly lost. I'll have to scrounge through my email once more but hey, at least I have the cliff notes. And honestly, seeing what's transpired on Trust The River, I can safely say it's exactly what Ward wanted it to be.

When I spoke to him years ago, he made it clear he wanted away from the stress of At The Drive-In, namely the drama affiliated with the band. Even the Sparta lineup shifts had exacted a toll on Ward and he indicated his country/folk solo act Sleepercar what was he really wanted to focus on, not reunions as much. And while I enjoyed the Americana vibe off his Sleepercar stuff, I don't think I appreciated fully until I got deeper into my 30's, which is why I can say a lot of that act has actually informed Trust The River. I know diehard Sparta fans would probably want the aggression of "Guns of Memorial Park" or "End Moraine" but this is a collection, not really of post-hardcore bangers, but of slow burners and mid-tempo jams Ward has tempered his life towards. He's simply outgrown the past and wants to evolve, and in my opinion, he's succeeded as a creative.

The opening track, "Class Blue", is a prime example of this as it takes a while for Ward's vocals to kick in. It feels like an instrumental session with glossy guitars and a melodic, catchy and accessible vibe before Ward's weathered voice kicks in. It's just something you wouldn't expect with this band. And make no mistake, he sounds like classic Jim but you can tell there's some age in it, making his words resonate just a but more. It's also polished like "Erase It Again" and "Atlas" but with a sheen that doesn't feel overproduced which I admit took away from Threes a bit. You can tell the band has tweaked to ensure they get a proper balance to keep with that dusty El Paso sound Ward cultivated as he moved on.

Now, while that doesn't negate the essence of Sparta of yesteryear, I wouldn't say you get the full-blown aura of Porcelain or Wiretap Scars. However, one thing is common from those records and it's the detail-rich novels of El Paso. Ward waxes on about love, religion and even how it is adapting to life as a career-man, husband and someone running a restaurant. And these are things he exuded such a passion about when we spoke, it's no surprise he's let the feisty days of ATDI and early-Sparta go to really let these new elements sink into his heart, soul and art. He wanted to find a voice away from both bands but still straddle a middle ground, and this album is just that -- with a lot of Sleepercar protruding, as per songs like "Believe" and "Graveyard Luck."

"Turqoise Dreams" is another great sample of what I'm speaking about, lulling below what older songs like "Cataract" and "While Oceana Sleeps" offered. And don't get me wrong, Ward sounds as good as ever: more tempered and less angsty, on these songs. That said, it's clear you won't get another "Cut Your Ribbon", although "Cat Scream" does tease an old school vibe with its demo-like, grainy feel. Cully Symington on drums really shines here too, with fast-paced kit work that harkens back to his Cursive and Beach Slang Days, adding shades of nuance to Ward's lyrics. It's a tad like Refused with a punk effervesence to the point you can tell the guys are just cutting loose and having fun.

As for the writing, it's as profound as ever, with "Spirit Away" coming off like a tribute to Nick Cave. Nicole Fargo's brilliant vocals take centre stage and I love Ward's sense of poetry to the track, with strings a la Game of Thrones carving out a purity that lies somewhere between a eulogy and ballad. It's also fully felt on "Dead End Signs" which is a raw and vulnerable piano-driven ballad. But for most of these Sleepercar bits, you do get moments of the old guard with "Miracle" boasting those cutting, silky guitars from the 2000s. Maybe if Ward roughed his vocals up a bit and dirtied this song in particular, it'd have more impact, but it's still worth its weight in gold.

By the time the record winds down, though, it's a pleasure to report there aren't that many bad songs to write about. And they're not even that bad in any case. Admittedly, I was a bit underwhelmed with the closer "No One Can Be Nowhere" as I felt it had too much dead space but hearing Ward shouting towards the end and showing his range is nostalgia enough for me to ignore. Plus, the ethereal hum of the pianos easily compensates. And that's just me being picky, because the track that precedes "Empty Houses" is my favourite off the album, although I think each listen will bear a different fave. Right now, I just love the slow burn and charming melody of this track and during the guitar break, when Jim says "fuck it," I think it's typical of what he wanted to do: his own thing, away from the past and reminding us that grizzled veterans do make art differently with age. And to me, it's like fine wine because Sparta has aged pretty fucking well, even if it's something way different than when the journey began.