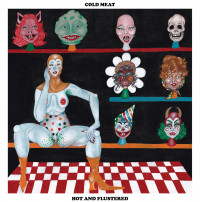 Australia are really pumping out the punk bands these days. Good ones, too. Lots of people are hyped on Dune Rats, I’m a massive fan of Press Club, Camp Cope have got a solid following and The Smith Street band maybe aren’t exactly new but are still killer. In fairness, Cold Meat aren’t a new band either (first output was a cassette back in 2015), but this is their first full-length release. The Perth 4-piece specialise in the kind of 70’s/80’s-style raw and raucous punk rock that will surely appeal to the purists out there, whilst still managing to feel urgent and vital enough that few punk fans can ignore them when they hear them. It’s also sufficiently politically-minded to tick that box. Songs like “Industry Sleaze” and “Womens Work” make the band’s position pretty clear and as we all know, it’s fucking great to hear someone shout about something that genuinely gets them pissed.

Each of the ten songs have a relatively uniform sound, sonically speaking. That’s not necessarily a criticism though, especially when you consider the album’s 10-song and 23-minute runtime. As a result of that, it becomes that rarest of things; an album that you can, and most likely will, listen to multiple times, feeling compelled to press play again as soon as the last track reaches its denouement. Cold Meat’s signature sound, as I mentioned above, is distinctly rooted in the earlier incarnations of punk. Spiky, trebly guitars drive the songs forward, with angsty, rapid-fire riffs complimented by a rattling, rumbling rhythm section sat atop what are, for the most part, relatively simplistic song structures. This is doubtless a deliberate stylistic choice though, and delivers a satisfying dose of real punk spirit. Although Cold Meat feel like a true band, the star of this particular show is the vocal talent of frontwoman Ashley Ramsey. She has an ability to sound irreverent and camp one minute, then indignant and furious the next without changing her style drastically. It’s not a completely unique talent, but anyone who can evoke, within a single song, both Jello Biafra and Kathleen Hanna is perhaps always destined to draw focus. Ramsey’s talents extend to lyrics as well. The songs are brimming with snarky couplets for you to pick out, and the use of repetition in the choruses mean you’ll be absent-mindedly singing along to the absurdly catchy melodies for days to come.

Admittedly this is far from being an original sound. Nor is it an album with much in the way of dynamics. However, it is an almost perfectly-realised example of a modern take on a sound that in all likelihood, most of the people reading this will be keen on. The world’s in a hell of a state at the moment; I don’t think that’s a controversial statement in any way. What this record has done for me over the last couple of weeks is put an extra bit of pace in my state-sanctioned ‘yard time’ each day. It must be almost impossible to listen to songs like “Bad Mood” and “Manic Mechanic” without (ironically) having your mood lifted by the sassy, strutting, hand-on-hip defiance that is so explicit in them. So curl your lip, jut your chin out, stick this on your stereo or headphones and you’ll feel better for it.