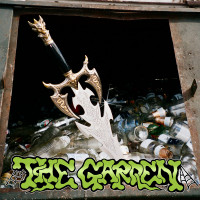 The Garden have previously positioned themselves as unworldly beings, doing things like referencing their base of power, an alternate dimension called Vada Vada, cranking out avant-videos that use ancient symbols (such as the fool) as much as repurpose them, and just generally being weirdoes. That’s why it’s so surprising on Kiss My Super bowl Ring (an epithet for “kiss my ass!”) the band comes down to earth. And not only that, where Vada Vada was a nexus for creativity and positivity, here, the band is decidedly negative. Where they used to soar in an alternate reality, reflecting on forcefields and slyly talking their way out of speeding tickets, here they lash back at earthy people over earthly concerns.

“I’m just sick and fucked up about what’s going on” they declare on “Sneaky Devil.” “Suck it up you weak ass fuck/take a hard look/You’ve always been weak as fuck” is the brunt of the attack on “A fool’s expedition.” Maybe the harshest smash is “some of you deserve to die but probably never will.” The band is pissed off. So, to that end, they couple it with their most frantic, most aggressive music to date.

Perhaps echoing the schizophrenia of Rudimentary Peni’s Cacophony or most Residents albums, the band is just all over the place and every song is really more like three or four tracks stapled together. One minute the storm forward in a grindcore blast. Then, they’ll pivot into some ultra-propulsive booming synth attack before cranking to a drone metal stomp. But, most of the time they’re taking tiny bits of genres and forging them into a sort of Road Warrior attack cart. This is their harshest release, sonically and lyrically, but there’s a calculated intelligence behind it. Instead of, say just taking the blast beat of grindcore and the sinister synth of EDM and throwing them in a blender, they take parts from different machines and figure out exactly how they fit together to create an album that is totally in their control while being totally menacing.

The band explores these concepts beyond a mere “I’m angry” exposition. “A fool’s expedition” is a real smasher while the band rides Joy Division-as-Unsane stomp.. Just as the song launches into a thrash attack, Wyatt Shears howls, “chapters aren’t meant to last forever/ turn the page.” This is reinforced by the multiple refernces to struggling here. “A struggle is what you make of it” Wyatt declares early on. “I just want knowledge, no reward” Fletcher Shears says later.

Whereas one might expect the band to verge more towards standard alt-rock or alt-pop, the band has come back angrier than ever with a release that’s the most daring strike to date (and that’s saying something). There is a lot of unfiltered direct anger here, but that’s not all there is- there’s pure art, which proves that this band still is exploring far-out territories that are nearly, but not quite, sonically incomprehensible. But moreso, despite the alien nature of these tracks, there’s very human, very earthly revelation.