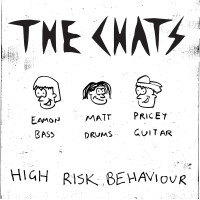 The Chats first burst onto the scene with their debut EP back in 2016. These young lads from Australia have been making quite a name for themselves these past few years. I fully admit to not taking the time to check them out until earlier this year when I saw they were planning a tour in support of their yet to be released debut LP High Risk Behaviour. I was not sure what to expect as I have read polarizing opinions of this trio. To be perfectly honest, I was immediately hooked with the singles that were released online in advance of the album. If you like your punk young, loud and snotty (see what I did there?), then read on!

High Risk Behaviour can be summarized as a garage punk roller coaster of a ride with hints of surf mixed in. “Drunk N Disorderly” kicks off the album with a solid bass and drum intro. This culminates into high gear with vocalist Eamon Sandmith channeling early Keith Morris. “The Clap” is a snappy feel good track about a good time gone bad. This was one of the albums' singles which has a slight commercial sound, but lyrically would never make it to radio. This track boasts some of the albums' best backing vocals. The surf-punk track “Identity Theft” features solid snare drum hits and solid guitar leads. Early Dead Kennedys is present on “The Kids Need Guns” in tone and guitar style. The Chats kick up the gear and turn to the snotty 1977 sound on “Dine N Dash” which is one of the platter’s faster tracks. The tempo is kept up on “Keep The Grubs Out” which closes Side A of the album.

The Chats chose a solid Side B opener in “Pub Feed” which might be the most solid track on the album. If there was to be a breakout hit for the band, this would be it. This track is fast, powerful, and most importantly, relatable to the listener. Who doesn’t crave beer and bar food to make them happy? That classic 1977 sound comes back around on “Ross River” which follows. “Heatstroke” boasts powerful snare drum hits and quick stops in the chorus. This is a powerful technique that helps making the vocals both more audible and coherent. “Billy Backwash’s Guitar” has a very loose guitar feel that carries the track. On “4573” the Chats rely on the always effective call and response method in the chorus which has been used by their punk rock ancestors repeatedly. The Chats show their ability to craft a more mature punk sound on “Do What I Want.” This track channels some of Europe’s best such as the Jam, Clash and SLF. One might even pick up hints of fellow Countrymen the Saints. High Risk Behaviour closes out strong with the anthem “Better Than You.” This fun sing-a-long will certainly get the pub going on any given night.

Bottom line, this is a fun record. The Chats are not reinventing the wheel. Instead they are paying homage to classic 70’s garage, punk and surf. Most notably though is the fact that they are doing it well. I look forward to future efforts from these guys. I expect Chats fever to catch on.