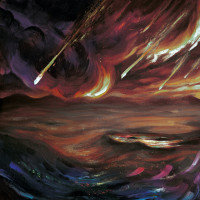 The world of post-rock can seem a little impenetrable for anyone not familiar with it. Long, meandering songs, no vocals to give the immediate character that other bands enjoy, often baffling and hard-to-identify themes and a fanbase that arguably deserves some of the chin-stroking stereotype attached to it. What you might not have discerned from this litany of faults and foibles, is that I am very fond of post-rock/post metal. Not possibly to the extent that the hardcore scene aficionados are, but in recent years, I’ve grown to enjoy the genre(s) immensely. But like all music, there’s some work to be done in sorting the wheat from the chaff.

Coldbones are a Kent-based trio who came into being back in 2014. This is their sophomore record, coming 2 years after debut Where It All Began. Proving that some of my earlier generalisations weren’t entirely unfounded, The Cataclysm is a concept album. It’s split into 2 distinct halves – “The Flooding of the World” and “The Burning of the Earth”. I shan’t delve too deeply into the stories that extend beyond those cataclysmic (see, it’s all tied together…) events, save to say that I don’t think I would have arrived at the full narratives without the aid of the press notes. However, with the benefit of the story behind the songs, I can honestly say that it has enriched my listening experience.

Coldbones’ sound lives somewhere between the sister cities of post-rock and post metal, though maybe somewhat closer to the former. The guitars are often heavily reverb-laden but more often than not, clean. In the case of “Ascend” (closer of the album’s first half), acoustic even. Passages of overdrive or distortion are present, but only so much as is required and never to an extent that detracts from the deeply emotive feel and intent of the record. Even when there is a lot going on; guitars, bass, changeable drum patterns, subtle synths, lead guitar lines weaving in and out (and even horns low in the mix in the case of “Ruin”), it never feels crowded. The moments of considered excess are relatively sparing as well, which helps to give them weight when they do come along. Album closer “Extinct” perhaps has the widest range both in terms of sonic dynamics and instrumentation/approach, though it is capped off with an increasingly stentorian lo-fi spoken word section, which if I’m entirely honest doesn’t quite hit the level of profundity I think it’s aiming for.

The term or phrase ‘crescendo core’ sometimes gets bandied around when discussing post-rock bands of a certain ilk and though that might not be inaccurate in the case of some bands, Coldbones approach their music in way that rarely feels predictable. The implicit suggestion with the term ‘crescendo core’ is that that is all the songs are doing, leading up to a crescendo. When done right, that’s a powerful and affecting thing to be able to pull off. And when you don’t have vocals, or by extension a chorus, then those peaks, crescendos, whatever you want to call them, are often very important. But what really allows me to enjoy this record and what it achieves superbly, is somehow managing to introduce and mesh multiple acts in single songs. There isn’t just a basic narrative arc, if you will, but there are twists and turns in the songs that manage to take you to many different places despite the individual track lengths being briefer than many bands in this scene. But returning to the point of this paragraph-long digression, Coldbones wield the weapon of crescendo with a versatility and subtlety that makes the result far more Christopher Nolan than Michael Bay.

I think if you’re the kind of person who has time for post-rock, then there’s a relatively decent chance you’re also open to dystopian, sci-fi vibes (another generalisation, admittedly) and that ambience is ubiquitous on this record. For all its gloomy base themes, there are moments when the mask slips and you’re able to see the wide-eyed glee of a band realising their artistic intent with a degree of swagger, even. The bassline of “Collapse” feels like it could be something Chris Wolstenholme of Muse would be proud of and “Hinterlands” has pulsing synth over wailing lead guitars sat conspicuously deep in the mix, before they return to the fore with arpeggiated laments. There are fabulous moments across this record, but it also works as a mood piece. In that regard it’s what I want from a post-rock record and when it’s even tied up with the silk ribbon of bespoke album artwork depicting the world the album conjures, then that’s just fine by me. It’s ambitious, cinematic, immersive and impactful. I could understand some people might be wary of listening to a record with these apocalyptic undertones at the moment, but I for one will be enjoying the end times that Coldbones are portraying here for years to come.