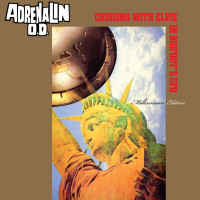 The deeper I get into the Adrenalin OD catalog, the further I get out of my depth. I was somewhat familiar with Let’s Barbeque (1983). The Wacky Hi-Jinks of Adrenalin O.D. (1984) has long been a favorite. I had never really listened to Humungousfungusamongus (1986) before reviewing it last year. Cruising with Elvis in Bigfoot’s U.F.O. wasn’t even on my radar. Since it was recently reissued by Beer City Records as a Millennium Edition, and I found myself at home with some extra time on my hands, I figured I’d better finally check it out.

If you’re at all familiar with AOD’s early work, the first thing you’ll notice about Cruising is that it was considerably slower. That’s not to say that it was slow, and it was also not necessarily the worst thing in the world. Speed was one of the band’s defining characteristics, but the first couple of records were so fast that the finer musical points could get lost in the chaos. The band’s other prevailing trait was their humor, which could also get overlooked as the songs flew by at a breakneck pace. At the very least the older stuff took quite a few listens to get all the jokes. On Cruising, you could pick out every riff and every groaner.

The second thing you might notice is a better quality production. While each album had been slightly better than the one before it, Cruising really hit the punk sweet spot. For the first time, AOD was closer to punk than hardcore. Some of that was no doubt the result of the influence of Daniel Rey. Yes, the same Daniel Rey most famous for his work with the Ramones. Cruising managed to sound good, but still nice and raw. As always the riffs were on point, but this time the backing vocals really popped too.

Cruising opened with the one-two punch of “If This Is Tuesday...It Must be Walla-Walla” and the bitterly funny “Bulimic Food Fight”. “Swindel” mocked bands that sold out. “Stew” and the extremely catchy “Second to None” were next. “My Mother Can’t Drive” continued the band’s mission of lampooning suburban life. “Theme From an Imaginary Midget Western” was a funny as hell surf/country/punk song that probably wouldn’t fly well in these humorless times. “Something About...Amy Carter” was a thrashy love song for the former president’s daughter. “Flip Side Unclassified” might have been the best song on the record. “Baby Elephant Walk” closed the album with a goofy (mostly) instrumental.

On this reissue there are also six live bonus tracks from when the band played 924 Gilman in 1987. There is at least one song from each of AOD’s first three full lengths. They definitely capture the power of the band live in their prime, but are still kind of a mixed bag. While it’s nice to get some extra songs, it’s also nice to be able to listen to the record as it was originally intended. Bonus tracks are generally better left for CD reissues or on separate discs, but this is obviously an extremely minor complaint.

Cruising with Elvis in Bigfoot’s U.F.O. only helps confirm the fact that Adrenalin OD is one of the best, if not most underrated bands ever to crawl out of the swamps of New Jersey. Along with Wacky Hi-Jinks and Humungous, it’s the third piece of the crucial AOD trilogy. Take it from Screeching Weasel, Anthrax, NOFX, Bouncing Souls, Night Birds, Municipal Waste, Darkthrone and S.O.D., who all name them as an important influence, and check out Adrenalin OD.

Seth Anderson: We Could Be