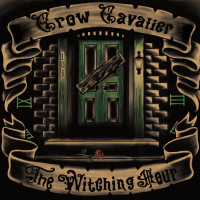 For those of you who caught my review of the split between Robber’s Roost and Crow Cavalier, it should come as no surprise that I was drooling at the mouth when I found out that the new Crow Cavalier album dropped a few weeks ago. Prior to this, I was limited to only a handful of recorded material from this band which I believe are on their way to legendary status. Their unique blend of Folk, Jazz, Punk, and Ballroom Dance music captivated me the first time I heard it, and its manic blend of instrumentation and dueling vocals, orchestrated by some of the best song writing of modern time, leave this group atop my list of favorite up and coming bands. Hailing from Colorado, they’ve found a way to seperate themselves from the other Folk Punk acts coming out of that scene, and the biggest reason for that being their incredible songwriting ability.

No two tracks sound the same, yet every track is very clearly Crow Cavalier. Without having heard this album, you could have played “Poet’s Relapse”, led by one of the two vocalists, and describable as an amalgamation of an irish drinking song (with lyrics light years ahead of any drinking song ever written) and a punk inspired pirate’s shanty, supported by a beautiful string section that elevates it to a level above any of their modern counterparts, or played “108 Gilbert Street”, a slow ballad like start, followed by poppy melodic sing-along anthem, led by a completely different vocalist, and sung with a focus on the lyrics, while the cello, violin, and guitars take a back seat, and I would have immediately known who was playing. Two, arguably contradictary tunes, that are so unique that they could only be one band.

Throw in “Bandits of Blood and Wine”, a straight-up ravaging punk tune, that could only adopt the “Folk” punk moniker because in the background are some violins and cello. The song erupts from your speakers, and gets you ready to jump into the nearest mosh pit, or start swinging at the nearest face attached to a MAGA hat. It may sound like a hardcore band, but the speed and anger exploding from the band, at least for me, created a level of aggression that I have only experienced once before… during a festival showcasing Hatebreed, System of a Down, Slayer, and Pantera, amongst others.

Woven through these tracks that inspire the need to go destroy the government and create a world where everyone truly is free, are beautiful songs that I can only describe as tunes you would see professional ballroom dancers performing to (if the ballroom dancers were also punks). “Swing Tea” and “These Family’s Rags” both get my body moving, and looking for a partner to spin, dip, and Patrick Swayze into the air, while spinning to the music. I have never taken a dance lesson in my life, but if Crow Cavalier wants to start a dance class, I’ll be the first to sign up. These tracks, and few others like them, are just FUN! How an album can contain ballads, angry hardcore anthems, and music to swing dance to, while not coming off as choppy, or chaotic, astonishes me, but this band has done just that and more.

I have to say, of all of the things that have come to pass because of the current COVID-19 pandemic, and its associated shelter in place, the biggest loss I’ve experienced has been my inability to see these musicians, as they were intended to play Folk Shit Up, and clearly that has been postponed. I, generally, try to stay as objective as possible when writing reviews, and perhaps my missing their live show is influencing what I normally believe to be very fair and impartial as one can be when giving opinions through the medium of album reviews, but I truly think this album is currently, and will end the year, as the best album of the year. Yes, I know Days N Daze are releasing an album in a month. Yes, I know NOFX and Get Dead are on the verge of releasing new records. Yes, my favorite band Escape from the Zoo is releasing an album this year. Yes, I’m sure there are another 50 or more bands that most of you reading this have actually heard of that will also release albums this year, but I cannot imagine a world where there is an album that is better orchestrated, more unique, and executed in a manner to challenge this record for top honors in 2020. If there is an album, I can’t wait to hear it, because it would have to cause orgasms upon listening to convince me that it even has the possibility to be this good.

Seth Anderson: We Could Be