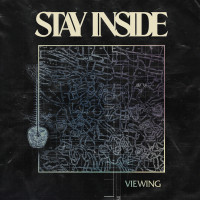 Brooklyn's Stay Inside are a band that was on my radar for some time but admittedly I didn't paid the proper attention. Granted, now's as good a time as any to get in on the action given their band name, right? All kicks aside, I remember hearing bits of their last EP -- it was covered here at the 'Org -- and for whatever reason, I didn't dedicate proper time to back-checking their catalog. Well, what a fucking mistake because Viewing is a cerebral and remarkably conceived album, not to mention one of the best written novels I've soaked in since the days of Thursday.

Now, that's not a stylistic comparison. In fact, it couldn't be far from, but what I love about Stay Inside is there's an emotional heft to their work similar to what Geoff Rickly concocted, or even the likes of Jeremy Bolm from Touche Amore. Interestingly enough, most of the tracks are set to an emo-grunge sound bed similar to the likes of Balance and Composure, Sainthood Reps and Citizen. Off the cuff, you get this with "Revisionist" -- incredibly detailed and extensively nuanced in its homage to the '90s drift of bands like Nirvana. The same can be said for "Wake" but don't get oversold: these are just samples of the calm, not the full chaos.

Other parts of the album draw from the screamo, hardcore and post-hardcore realm with "Void" rattling off along the lines of La Dispute and Touche, and "Stilt" drawn from acts like The Saddest Landscape, Departures, and standing out with a funky beat a la Dance Gavin Dance. In other words, there's a lot of diversity packed in, so much so when the shimmery "Divide" rolls around, it feels like an experimental jam or a new album on the whole with New Jersey's Gates popping to mind. And make no mistake, the interplay and dynamic of Bryn Nieboer, Chris Lawless and Chris Johns on the mic is near flawless. Again, bands like Thursday, Loma Prieta and Saetia come to mind, with a dark setting and haunting atmosphere along the lines of Godspeed! You Black Emperor arising as a backdrop.

It simply feels like a bleak, isolated story occurring during the end of days, and something that's timed in such a weird manner. Not that it's a bad thing, but again this kind of serendipity does leave the record sinking into you with some more gravity. The shadowy aura is eventually balanced out by more accessible, melodic jams though, as per "Ivy" and "Monument" which you feel are the anthems that'll get more play, as well as the closer "Leave" -- an acoustic along the lines of Adventures (ironically, another No Sleep alumni). As it winds down, I can't help but feel the second half of the album just meanders a bit, but still, this record is more punches above its weight. And ultimately, as you mix and match, what remains is a shot of introspection and a record which reminds us trial, tribulation and death is always just over the horizon. But it could perhaps be lessened if we, you know, stay inside...