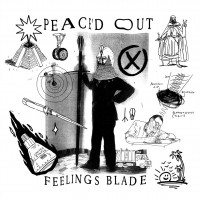 On September 29, 2015, Peace’d Out, in the cryptic fashion they have always operated in, announced their return as a band via Facebook. About four and a half years passed before they made good on that promise, but holy shit did they make good on that promise. The band released a smattering of performance videos this March and then seemingly out of nowhere Peace’d Out dropped their brand new full length titled Feelings Blade. The band which started off as a collaboration between former Drive-Thru Record labelmates Vinnie Caruana and Steve Choi remains rounded out by Casey Deitz and Roger Camero of The Velvet Teens and Warriors.

A wobbly bass reverb kicks off Feelings Blade before giving way to a relentless, technical assault of spaced out metal, hardcore, and chaotic atmospherics that never lets up over the 27-minute runtime. Opener “It’s a Long Way Back to Civilization” is the perfect introduction of the nightmarish and apocalyptic sounds found here. The following “Quasarburn” barrels through with hardcore punk energy and a chorus that wouldn’t sound of place on an Every Time I Die record. “Oh Nein” will fill the whole in your heart that’s been there since The Dillinger Escape Plan disbanded a few years ago. These three tracks alone demonstrate the incredible growth on this album.

While their 11-minute debut had a taste of what’s found on Feelings Blade, this album feels like the band’s been perfecting their sound every night during the intermittent 9 years in sweaty clubs across the globe. This despite only playing a handful of shows in 2013. The production elements, both programmed by Choi and produced by the RX Bandits guitarist, add layers to the technicality of sounds his guitar shreds off into in every direction. Caruana’s vocals are stronger here than on any of his other projects, demonstrating a range he’s not previously unleashed. While these felt like experimental elements on their self-titled release, they are an integral part of the equation here.

The tribulations of the nine to five weigh heavy on the blade throughout the album. “I’m coming home / I’m coming home / Let the scavengers feast on my fucking bones” growls Caruana on “Hemmingway” as the song finishes into the jazzy introduction and fancy stick work of “Feelings Blade,” a 30 second ripper. “A warrior's instincts / Cut ‘em down in their work clothes / Only some survive / Running from the sun” is bellowed during “Trash Trucks” as outright sludgy guitars give way to the final guillotine; “The shame is stronger / Than the love.”

Feelings Blade was nowhere on the anticipated release radar in the beginning of the year, but it’s certain this radar wasn't set for this frequency. Peace’d Out operates in the shadows, but when you generate this much heat, it’s impossible to miss.