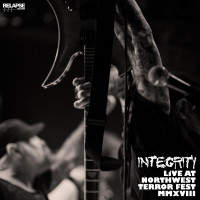 Often, marketing is a reaction to achievement and lags one cycle behind the art itself. That’s why, instead of Judas Priest releasing an album to back Screaming for Vengeance (one of their many high points), Priest Live, their big “TA-DA” live album followed Turbo, a bloated period where the band’s best songs were no longer fresh and the band was succumbing to excess.

And that’s why Integrity’s Live at Northwest Terror Fest 2018 is such a rarefied treat. Recorded just after the release of the band’s stellar Howling, for the Nightmare Shall Consume (and its corresponding dessert, a 2018 split EP with Krieg), the live album finds Integrity pulsating with the energy of having just released a career high point. Now, it’s always great when a band releases a cool album, but it’s especially poignant and meaningful when a veteran band of over 30 years releases what might be their best studio release and that excitement and energy translates directly into this live recording.

The set itself is a massive 20 track, hour long sprint. Focusing on their newest releases and their earlier classics, the band sounds rejuvenated and hungry. For one thing, vocalist and band mastermind Dwid Hellion’s bark-howl is as fiery as it’s ever been. Throughout the hour-long set, he barks and growls and shouts with conviction. Of course, as we all know, he’s sending out sermons about the falseness of reality, the end of the word, and all sort of astral-plagues. He sounds like he means what he’s saying and this is especially true with newer tracks like “I am the Spell” and “Die with Your Boots On” where the band indulges in, not necessarily more complex, but more frantic metal charging. Hellion loves his Japanese hardcore bands and G.I.S.M.’s “Document One” is given a ripping rendition- as is the cover of “Sons of Satan,” which was originally by Hellion’s Vermapyre project.

Main guitarist Dom Romeo is due some credit here. A noted fan of both the heaviest of heavy metals as well as NWOBHM, Romeo blends the two and that fits Integrity to a T. That is to say, Romeo loves solos and divebombs and soaring waah-waaah-waaaaahs with his guitar, but he pulls the clever trick of taking those sparking chords and bending them into something loose and dirty. As the entire bands stomps and charges and rolls along with a hefty amount of titanic riffage (take the hard smash of “Judgment Day” as an example), they sound like they’re just barely hanging on as the massive freight train rumbles down the track. That’s good.

One lesser stated aspect in live albums might be song order. The Melvins’ Buzz Osborne has stated that the Melvins play the same set every night on tour because they want songs to be heard in a certain order as a full experience- that is, a live band is not a jukebox. Frank Zappa and Alice Cooper were/are the same way. So is Integrity. The band takes careful steps to give the live show a certain flow so that, while they open with the hot charge of “Vocal Test,” and blast through a few Humanity is the Devil classics, the next step is to take the soaring ambient opening of “Hymn for Children of the black flame” before ramming forward at twice the speed. See also the huge lumber of “Systems Overload” that follows the schizo-freakout of “Armenian Persecution.”

Integrity have released a few live albums before. But, most of those were either soundboard recordings or very limited releases. Each of those releases have their own merits. That being said, to record a veteran band rejuvenated and slamming out their best material, live on stage, is like catching lightning in a bottle. Luckily for us, here, someone was quick with the cork.