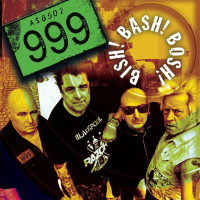 One of punks’ longest running bands, 999 formed at roughly the same time as the Sex Pistols, the Clash, and the Ramones. But their sound set them apart at the time. Not many bands had the same radio-friendly, almost cheerful twist on punk as 999, and it would be another 5 years or so before that sound broke from its roots completely and was labeled New Wave.

Though not usually mentioned among the best of the first wave of U.K. punk bands (a woefully incorrect oversight), 999 has continued to use their position below the radar to forge their own path musically. And while their recorded output has been sporadic, the band has been performing together nearly nonstop since 1976. Their first album in 13 years, Bish! Bash! Bosh! is not without its challenges, but makes up for it with plenty of heart.

What stands out the most is that the whole record sounds fantastic. The production is clean and brings plenty of punch that highlight the top rate lyricism, meticulously crafted melodies and harmonies, and impeccable guitar work. And while it may not be standard practice on a punk album, each song is tweaked to have its own sonic identity. All the different guitar tones, vocal setups, and drum panning solidly hold the listeners interest from beginning to end; especially useful in parts of the record that otherwise might have you reaching for the Skip button.

999 have always been a band of great intelligence lyrically, and Bish! Bash! Bosh! is no different. As one might expect, most of the record has to do with subjects of a social nature. Be it gun control (“Shoot”), domestic violence (“Psycho Man”), post-war PTSD (“My Dad Trashed My Submarine”), or the impending doom brought on by climate change and pollution (“Timebomb”), they speak poignantly and with firm position. However, there are moments of downright filler (“Monkey”, “Dr Nick”), as well as “Addicted”, a song that rambles repetitively about all the things we as a society are a “slave to”. It’s an idea that may have raised eyebrows say, 40 years ago, but today just comes off as trite and a bit juvenile. It’s a shame too, as the song has a bouncy rockabilly edge to it that make it musically one of the best tracks here.

Something else the album suffers from is redundancy. The songs mostly appear to have the exact same structure, following the same pattern, right down to the placement of the guitar solo. Again, this would be annoying if they didn’t all sound different. A few exceptions are the aforementioned “Addicted”, shock-rocker “I Hate It All”, which would not be out of place added to the score of Rocky Horror, and “The Pit and the Pentagon”. The latter just may be the best song of the set; an autobiographical piece on coming of age in the music scene, aligned in time with U.S.-led wars.

Despite its hiccups, Bish! Bash! Bosh! is a finely tuned set of work from a legendary band. Those familiar with 999’s catalogue will hear plenty of familiarity, with enough surprises along the way. Not all surprises are pleasant, but the passion, the fun, and the skill on both sides of the board still make this album worth your while.