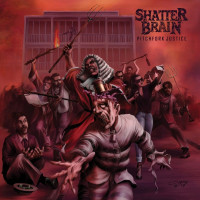 When an album opens with a party-thrash riff that veers dangerously close to hair metal, followed by an absurdly prominent vocal “Blergh!” then it will likely garner my attention. I’m not saying that I’d necessarily think it was good, but it made me sit up and take notice, that’s for sure. Adelaide’s Shatter Brain do exactly that on this, their debut album, and there isn’t much let up from there, frankly. When you consider the bombast that exists in the music that Shatter Brain make, then it might seem less surprising to learn that even before having an album to their name, they’ve toured extensively (Japan, Thailand, Malaysia, New Zealand and of course their native Australia) and have supported Max and Igor Cavalera as well as Carcass. All this for a band who have existed for a little over 2 years and with a single EP and demo to their name is either impressive or curious.

Genre-wise, then crossover thrash is the most succinct explanation I would reach for, but it’s the party atmosphere the band seem to have infused into their every riff, scream, tempo change and breakdown that really characterises this record. The pace is lower than you might expect from this description, but again that lends itself to beer-swilling and stomping more so maybe than a lot of more typical ‘party thrash’ like Municipal Waste or Havok. In fact, at times the pace drops right down, and because of the guitar tone and various vocal styles employed, it even verges into sludge territory occasionally. The band the press notes most inevitably use as a reference point are Power Trip and I’d be lying if I said I didn’t understand why. That stomp I mention borrows heavily from the hardcore scene, which is where the Power Trip comparisons come from primarily, I’d say. In actual tone and the feeling that Shatter Brain evoke, there’s doubtlessly a lot of the sleaziness that I associate with the early Guns ‘n’ Roses, post-hair metal scene. There are grandiose dual leads, thudding, rapid-fire rhythms and moments where the whole band resolve back into a groove after each seemingly veering off course with genuine impact. It feels ramshackle at points, but that’s very clearly done wilfully and is no worse for it to my mind.

The secret weapon in Shatter Brain’s arsenal however, is vocalist Tom Santamaria. His range and ability to veer from Tom Araya, to James Hetfield, to Anders Fridén within a matter of seconds is genuinely astonishing. He can draw from almost 30 years of metal influences convincingly, including having the ability to perform the modern vocal gymnastic style of deathcore bands like Shadow of Intent or Signs of the Swarm at will. It’s quite a thing to behold and against most bands, it would probably be overpowering. Mercifully, the backdrop that Shatter Brain provide is equally ambidextrous and unpredictable. The only real sense that this is a debut I get is in the fizzing, crackling effervescence of it. Outside of that, it feels almost too self-assured, but that just plays back into making it feel like it’s all being performed by ‘rock stars’ – albeit in a kind of Australian Sunset Strip mould.

I’m not entirely convinced I’ve heard anything exactly like Shatter Brain before if I’m honest. I absolutely expect a lot of people not to be on board (the deathcore elements, the borderline ‘wacky’ moments, the hair metal and lyrical obnoxiousness to name just a few things that people might get bent out of shape about) but I truly like to imagine that Shatter Brain couldn’t give a fuck what those people think. I might be right, I might be wrong, but that’s what I’m going to choose to believe; because that way, we’ve got a wild, untamed, band of maniacs making slamming party thrash/crossover/sludge/death/whatever this is whilst not being concerned about people’s opinions. And though I might not agree with everything they have to say (thoughts on ‘PC culture’, for example), I like the thought of a new band having that sense of nihilism.

It's also to the point. It’s 9 tracks (one of which being an interlude) and less than 40 minutes. Depending on your point of view, it’s potentially a repugnant amalgam of a variety of sub-genres, performed by people whose opinions you don’t care for and that you have no need to listen to, or it’s something kind of new, with towering riffs and grooves that you can imagine smashing a whole heap of beers and going nuts to; in a sweaty basement or festival field equally. Either way, if we’re assuming that Shatter Brain know how they will be perceived to the first group mentioned above (and we are, because it’s my review), then I think that whether you like it or not, this is a damn successful debut. It’s absurd and I love it.