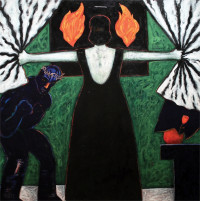 in the red records

Alice Bag, otherwise known as Alicia Armendariz, has been involved in the punk rock community since forming her initial band the Bags in Los Angeles in 1977. Alice Bag has gained further notoriety as an author, educator, feminism archivist, and solo artist. Alice Bag’s most recent offering Sister Dynamite is yet another strong and memorable punk rock release in Alice Bag’s discography.

Alice Bag describes her music as, “exploring the intersections of punk, queer pop and alternative rock”, and that is exactly what happens throughout Sister Dynamite. The music itself is driven and up-tempo traditional ‘70’s style punk that is further accented by the lyricism and ear catching choruses of Alice Bag. While the genre itself is not my first choice personally, as my taste strays to a more contemporary punk rock sound, I can appreciate the low-fi ‘70’s rock influence and expert vocal delivery throughout the record. Songs such as “Breadcrumbs”, “Switch Hitter”, and “Lucky” really highlight the range and talent of Alice, as gruff crooned verses make way for ear catching singalong choruses.

The production quality displayed in Sister Dynamite is well suited to the direction and style of the band. The music has a nostalgic feel with ample amounts of low-fi moments and reverb, which are nicely balanced out by clear and cutting guitars and vocals. The punk rock quality is maintained without losing the tongue-in-cheek pop vibe. The band and producer have done a good job of creating a driving punk rock sound with edges that are polished enough to land the band on most alternative radio stations.

The content of the lyrics explores LGBTQ2 and feminism related themes and experiences with an expertly crafted mix of ‘70’s rock and punk rock backbone. Sister Dynamite is a solid record from a veteran punk rock musician, that will not only land with long-standing fans, but also serves to engage the widespread punk rock and underground music community.

Rent Strike: Burn it All! [EP]