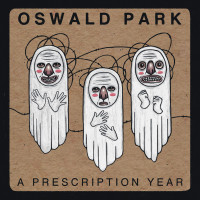 Oswald Park is the moniker of the new solo project of drummer Jordy Bell, known for his work with the bands the Crusades and the Creeps. This time around, Jordy takes things down a notch and gets more emotional than previous works. The project is self-described as “sad songs for weird times.” In an era where every genre and sub-genre has been overused to death, that might be the best tagline ever that one could imagine for Oswald Park. On A PRESCRIPTION YEAR, Jordy voices everything from self-reflection to regret.

“Sorry” kicks of the album with a steady alt rock guitar lead which takes you back to the 90s. The verse shows emotional passages sung over a solid lead. The track kicks in an gets louder in the chorus which boasts solid backing vocals. “Young, Drunk, and Stupid” is a solid power pop number which flirts with pop-punk. This is a very upbeat and catchy track with the classic palm muted guitars in the verses. This is a very relatable song which will make you think of life in your 20s. Musically, this is reminiscent of Alkaline Trio or even the Parasites. Jordy slows things down for “Fall” which borders the classic emo sound. Slower Jawbreaker vibes are present throughout. The tempo is quickly brought back on “Come Back Around.” This upbeat track boasts a loose guitar lead and strong bassline. One is reminded of Braid with the soft then heavy song structure. “Home” is a mid-paced number about the journey. We have all had those long car rides which presented ample opportunity to basically overthink everything. The pace is picked up again on “Midnight Hours” which shows hints of 80s new wave. This track boasts a solid outro bridge that comes out of left field to hit you with a hard right. “December Snow” closes out this solid debut release. What makes these songs so effective is in their brevity as no track on the album even hits the four-minute mark.

A PRESCRIPTION YEAR is a trip down memory lane for me. This takes me back to my college years which included many long drives, late nights, and self-reflection. There is little doubt that this project is a true labor of love for Jordy. This is a true throwback album in every sense of the word. Musically, this will take you back to the 90s. Lyrically, this appears to be Jordy’s personal journal from his past. This is a very solid debut effort which will appeal to the melancholier side of punk rock.

Rent Strike: Burn it All! [EP]