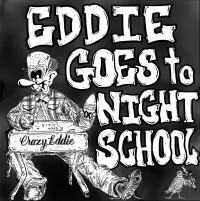 Something rare to find but very welcome in hardcore is a band that can both nail a great hardcore sound, and at the same time not take themselves too seriously. New York’s Crazy Eddie is one of those rare bands that does both very well. I’ll let our readers in the NY tri-state area hold onto the joke in the bands name, and tell everyone else about their new E.P. Eddie Goes to Night School.

Crazy Eddie makes no frills, loud, fast hardcore; plain and simple. In that way Eddie Goes to Night School feels like a classic hardcore 7” from ’84. But at the same time, they don’t stay in the Eighties. Believe it or not, it’s perfectly realistic to make, in 2020, classic 80’s New York Hardcore songs, that aren't all about what New York was like in the 80’s. Ahem.

With it’s members coming from such seasoned acts as District 9 and Fahrenheit 451, Crazy Eddie has been able to hit the ground running with a sold baseline to build from. They incorporate that platform into something all their own, and the result is the freshest sounding NYHC band since Backtrack.

“Is What It Is/New York” is the requisite aural tour of the neighborhood: dirty, smelly, crime, but they love it anyway because it’s home. Luckily it’s tuned to the present day, and is delivered with Chucky Brown’s growly snark, sure to be the bands trademark. “Bored With Life” uses the staple tempo shifts of a Minor Threat or an early Suicidal Tendencies, to blast out its unapologetically realistic view. Anxiety and inner rage come out in “Who’s To Blame”, while “Welcome To the Show” invites one to the (relative) safety of a hardcore show as an escape from the world outside. The set closes with “The Ballad of Cheech & Chong”, a change from the norm that's full of comedy tropes and self-deprecation. Some may find the humor uncomfortable, but it’s all in good fun, and the last thing I’d expect or want from this band is an apology.

Crazy Eddie is going to be making some big waves in the hardcore scene very soon. Get on board now: you don’t want to miss the fun.