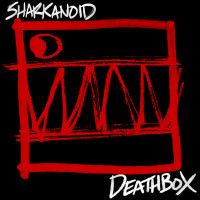 Rick Johnson is pretty well known around the Grand Rapids area. He plays bass for our best known musical export, Mustard Plug. He runs Cold War Studios, which has become the go to place for local punk bands to record. He is the head soundman at our best venue, the Pyramid Scheme. He’s a solo artist. (He even has a podcast with Mike Park.) On top of all that, he apparently still has time for another project, Sharkanoid.

Sharkanoid is Johnson and Dan Potthast from MU330, and is supplemented by a rotating cast. They have a sound that’s not easy to pin down. I’d definitely call it punk, but other strong influences are allowed to rise to the top too. I definitely hear lots of new wave, and maybe a little blues or soul. Devo and early Ministry clearly helped shape this thing, but they don’t seem bound by any single sub genre. Tones shift from dark and heavy to relatively upbeat and tongue in cheek. What must be said is that there is no trace of ska.

Death Box is Sharkanoid’s second album, and had been in the works for four years. The recent stay-at-home order allowed Johnson the opportunity to finally finish it up. (A silver lining in the apocalypse?) “Flesh and Bones” is the ragged and guitar driven opener. “Acid Test” adds some new wave synths which hang around for much of the rest of the record. I found “Go to Work” both poignant and depressing. Same with the aggressive and current feeling “Getting Dark Getting Late”. “Watch Your Step” adds some bluesy organ, and has a positive message even if the music doesn’t match. Like the previous song, “I Ache” wrestles with aging.

“Business Meetings” is like a more spastic Devo. “Rock the World” is, not surprisingly, a big rock song for a world that’s falling apart. “Properly Properties” loses all melody and adds a slapped bassline that would make Korn proud. “Who’s Got the Time” is a highlight, and might best represent the album as a whole. “Boring Life” is a little folky, and comes complete with Dylanesque harmonica. “In the Middle” is reminiscent of ‘80s college rock. “Honestly” is the only straight up boy loses girl song, and brings things to a satisfying conclusion.

The cool thing about Death Box, and Sharkanoid in general, is the variety among the short songs. No two are exactly the same, which is a rarity these days. It also manages to deal with depressing subject matter without actually being depressing. The band is geographically challenged, so they’re not able to play live very often. There is also no physical release at the moment, but it looks like it will eventually be available on cassette. Despite these marketing nightmares, Death Box is worth the effort required to seek it out. It’s good that this thing found its way into the world.

Crazy and the Brains: Where the Juice Drips [EP]