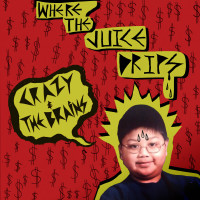 Here’s an interesting turn for Crazy & the Brains- they’re not aliens anymore. When the band first crashed on the scene, they released tracks like “Saturday Night Live” and “Lindsay Lohan” where they sang about unhealthy fixations and the depressions thereof. After that, they released what appeared to be a Vampire Weekend diss-track. Then, after that came “Good Boy” which appeared to be written from a perspective akin to Norman Bates. In all those tracks, the band appeared to be extraterrestrials that experience emotions that were ostensibly similar to human feelings, but driven by weird desires, weird obsessions, and repurposed junk culture.

But, now on Where the Juice Drips, a release the band is touting as the next phase of the band, the band is finally being direct. Album centerpiece “I Don’t Deliver Pizza Anymore” says as much. Singer Christoph Jesus rat-a-tat-tats out a staccato tale while the band starts the track with a surprisingly melancholy backing. As Christoph says, “I’m just being honest with y’all” before detailing his (and the bands) fundamental drive. On the tune, Christoph tells the tale of how he was hit by a car while delivering pizza and woke up in the hospital with bleeding on the brain. He positions the crash as a metamorphosis as the astral-rip that purified his very being. Honestly, it’s earnest and deep, and it’s very Crazy and the Brain-ish for them to use Jersey style pizza as the basis for catharsis.

More than ever before, the band is rocking. Opening track, “Over the Edge” takes the speed and power from James Williamson and Early Dangerhouse singles. Here, riffs are clean, powerful, and driving. Where the band used to be a buzy, clanking ramshackle, now they’re a charging force. Xylophonist Jeff Rubin adds both a percussion battery and gentle touch across the album. As he jingles on “Brown Rice,” there’s a certain creepiness that clinks through the track’s eerie parts. Guitarist Ernest Young’s guitar is bigger and broader than before. Although he’s from the world of metal, here he looks to early punk, and perhaps, proto-punk, as the key to slamming. Bassist Brett and Drummer Jon Lango give the band its most powerful legs to date. Not every track here is a bruiser, but when the band looks to knock it around, the swing with a bluesy-punk hammer in the best possible way. “Live Fast Burn Cash” takes Beach Boys chorus, for example, and nails it to the top of an Adolescents surf-punk sprint.

Beneath it all, the band is approaching things we all deal with head on. Of course, the band kind of always dealt with these topics- is “Lindsay Lohan” about having an unhealthy fixation with a tabloid star or is it really about unrequited affection? What’s telling is that the band no longer feels the need to cloak their emotions in a dayglow paint. (And it helps that they’ve refined their tunes to a raw power). Where the Juice Drips shows that the band might be maturing, but they’re not growing up. If only each of us could be so lucky.