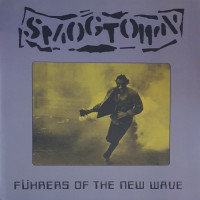 If you hang around the punk scene long enough, there will come a time when you start buying more reissues than new releases. I’ve been near the tipping point for years. The lack of interesting (to me, at least) new records in 2020 seems likely to finally push me over the edge. The good news is, sometimes that means I’m discovering things I missed the first time around. It blows my mind that records released in 2000 are now 20 years old. Time really does fly when you’re (occasionally) having fun.

What’s the point of all this rambling, old man Trauma? My most recent discovery is the 20th anniversary reissue of Smogtown’s debut LP, Führers of the New Wave. Smogtown formed in one of the many beach suburbs of Orange County in the late 90’s. (Most of the band still plays today as Gross Polluter.) They made a handful of albums and even more singles, but Führers remains their most enduring work. And for good reason.

Führers is pretty much universally loved by critics and those lucky enough to have heard it. The thing that makes this Garage Rock Records version extra cool is that it’s presented as the band originally intended it. At some point, unintentionally, Führers became a loose concept album. Twenty years ago, the people at Disaster Records made the unfortunate decision to resequence the tracks. So here, the 13 songs are in order according to Smogtown’s original vision.

Musically, Smogtown is certainly influenced by the OC bands that preceded them. Bands like Agent Orange, Social Distortion, TSOL, DI and Adolescents. It’s a strong pedigree to be sure. There are traces of surf-punk, but they were even more influenced by skateboarding culture. Ultimately, the music is straight up punk. There is no metallic hardcore or pop-punk, both of which were very popular in fearful era of Y2K.

Lyrically, Führers seems to be set in a space aged, dystopian future. But in reality, it deals with the problems the California kids were facing at the time. Problems like youthful boredom and the death of the suburban dream. The songs are loosely tied together, but each is also more than capable of standing on its own. It’s hard to pick favorites, but a few do stand out. Side 1 opener “Teen Age”, “Neighborhood Brat”, “Payola or Die”, and closer “Static Ecstatic” are all excellent.

On side 2, my favorites are probably “Judy’s a Model”, “I Am the Cancer”, “Ode to Street Violence”, and finally, the title track. Like any proper classic, there’s not one bad song. You don’t have to care at all about following the storyline to thoroughly enjoy the music. That being said, even in the digital age, this is a record that’s best taken as a whole. This new Garage Rock pressing comes with a huge 24” by 36” fold out cover, and the frst 200 are hand numbered and include an embroidered patch.

Growing up in the ‘80s, we lived in constant fear of nuclear annihilation. I didn’t realize that two decades later, the kids had similar anxieties. The truth is, this record feels like it could have been made in the ‘80s. Coming from me, that’s a huge compliment. It has that timeless punk quality. If, like me, you missed this the first time around, consider yourself lucky. You get a second chance to discover Smogtown and the amazing Führers of the New Wave.

The Homeless Gospel Choir: This Land Is Your Landfill