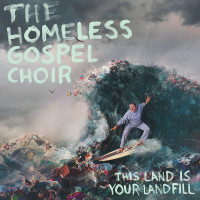 A few months ago, The Homeless Gospel Choir embarked on their second first tour. As frontman and long time punk rock troubadour Derek Zanetti told it as he took the stage, sometimes you start a punk band with your best friends in your mid-thirties. The band rounded out by Matt Miller (Endless Mike and the Beagle Club, Wingnut Dishwashers Union) Maura Weaver (Mixtapes, Ogikubo Station), Megan Schroer (Boys, Kitty Kat Fan Club), and Craig Luckman (Small Pollen, Belly Boys) launched into their first song which also happens to be the first song on their debut full band album This Land Is Your Landfill. Within 46 seconds as the gang vocal harmonies sing out “bada bada da da'' over celebratory horns, it's clear The Homeless Gospel Choir was always meant to sound like this.

The acoustic guitar that brought Zanetti to stages across isn’t abandoned on This Land Is Your Landfill. Rather, the rest of the colors are just filled in around and on top of it. You can hear clearly his trademark sound in the opener “Don’t Compare,” but when the drums start rushing towards the chorus, it’s explosive. “I’m fed up, fed up, fed up!” sings Zanetti and company before kicking out into warp speed indie-punk. It’s impossible not to find yourself moving along with the music. Tracks like “Art Punk,” “Young and In Love,” and closer “Punk As Fuck” continue with this energy and define the scuzzy power-pop foundation of the album.

This Land Is Your Landfill isn’t simply just flipping on the amps though. The addition of such pop-punk scene veterans with an auxiliary group of musicians composed of players from The Interrupters, Anti-Flag, Punchline, and Lucero really make for a maximal sounding album. The sly barroom rock of “You Never Know” sits perfectly next to the doo wop tinged guitars in “Lest We Forget.” The backing vocals from Weaver and Schroer really add new dynamics to the song felt even more when peppered with guest appearances that bring contrasting voices to the mix. See “Young and In Love” for the best example of this.

“Art punk fuck up locked inside / In the middle of summer time / I don’t want to go out” sings Zanetti on “Art Punk.” It’s weird how a lyric like this hits differently than its original intention. It’s impossible to separate the timing of the release of This Land Is Your Landfill from the coronavirus pandemic. When Zanetti admits he’d live a whole lot more if he wasn’t convinced the world was ending while measuring the distance to who he is, it’s impossible not to break your heart. It's the same feeling when his voice tapers off on “Lest We Forget” with its concern for a phone call, or lack of one. The lyrics throughout This Land Is Your Landfill intermix the isolating effect of what just has to be the latest stage of capitalism with buoyant observations of how your surroundings amplify it.

This Land Is Your Landfill is a celebration of the overwhelming sadness that can be all consuming and turning it into a party. It sounds like the culmination of inspiration that took a light-bulb-going-on-moment to be fully realized as an adult sounding and fully fleshed out punk record. Its hope is inherent and unfortunately will have to be delayed a bit longer to be fully realized in community with others. Until then, its art punk still locked inside.