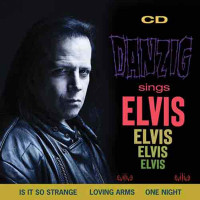 I’ve been giving Glenn Danzig my money for a long, long time. I was a fresh faced, long haired, 15 year old skater kid when he dropped his eponymous debut album way back in 1988. I was blown away. Lucifuge in 1990 was somehow even better. I have bought every proper full length ever since. (Not to mention multiple copies of most of the Misfits and Samhain catalog.) I’ve hung in there through thick and thin. It hasn’t always been easy, at least not since the 4th album, 4P (1994).

That’s when the original band started unraveling and Danzig pretty much became a solo project. (I feel there’s a strong Alice Cooper band versus Alice Cooper solo comparison.There was plenty of good solo stuff, but it never had quite the same magic.) The industrial flavored 5th album, Blackacidevil (1996), was not good. The solo, self-indulgent, so-called classical albums, Black Aria (1992) and Black Aria II (2006), were even worse. The rest of the catalog is a mixed bag of winners and losers, and an abundance of mediocrity.

All that being said, Glenn Danzig is a legend of both punk and metal. He’s earned the right to do whatever the hell he wants. (See the critically disdained Verotika movie he directed as more proof of this.) Unlike the Comic Book Guy from The Simpsons, I don’t feel like my loyalty means that he owes me jack shit. No one put a gun to my head and forced me to buy Satan’s Child (1999) or I Luciferi (2002), or even the long-promised Danzig Sings Elvis.

Unfortunately, Elvis has the same type of production as Skeletons, Danzig’s 2015 covers album. While the sound wasn’t ideal for that either, it managed to work for that ragged collection of biker metal and songs from faux Satanic B-movie soundtracks. These songs need a bit more polish and finesse. While I’m sure that there were plenty of talented musicians involved with this project, the band ends up sounding clunky and amateurish. The musical highlights are few and far between.

Of course, Danzig more than makes up for that with his powerhouse vocal performance, right? Unfortunately, he doesn’t. I take no joy in reporting this, but he sounds pretty ragged. This isn’t really intended to be an insult. If he were a mailman or an accountant, he’d probably be retired by now. Love it or hate it, Danzig had an undeniably amazing voice. It just seems fried. It makes sense, he’s more than 20 years older than Elvis was when he finally left the building.

The King was obviously a huge influence on Glenn Danzig, and they have similar voices. This album had been in the works, or at least rumored of for many years. On paper, it even seems like a damn good idea. In reality, it falls well short of expectations. The best songs are probably the darkly sexual “Fever” and the ballad “Always on My Mind”. Maybe this thing would have worked as an EP, but too many of the 14 songs are forgettable.

For me, Danzig Sings Elvis provides more questions than answers. Would this have been great 30 years ago when Danzig’s pipes were at their peak? What if his band wasn’t just hired guns? Could a different producer have elevated this thing beyond just OK?

Don’t get me wrong - I’m a completist, so I’ll probably still buy this. I’d rather listen to it than most emo or ska, but that’s not really saying much. Many of the Danzig faithful will do their best to put a positive spin on this thing, but I just can’t. For me, Danzig Sings Elvis might as well be Black Aria III.